Advertisement
You are here: Home » Wearables and Internet of Things : Part II
Advertisement

In the previous part of this series on Wearables and Internet of Things, we briefly discussed about the wearables. In this part, we will discuss the basics on Internet of Things and the communication protocols used in conjuction of current wearable technology. Historically wearables were simple mechanical calculators. But right now, wearables means some sort of electronics using communication protocols.

The term “Internet of Things” was coined in 1999 by the Auto-ID Center at the Massachusetts Institute of Technology (MIT). Here, for the first time, an RFID infrastructure was designed, according to which computers can obtain information from humans, record states and carry out actions. In 2002, the title “Internet of Things” was first mentioned in Forbes Magazine.
By 2005, the term was included in book titles. The first scientific conference was held in 2008. In 2009, the Commission of the European Communities published an action plan addressed to the European Parliament. The Action Plan concludes that the Internet of Things is a prospect for the next 5 to 15 years. A pro-active approach is also proposed to secure the benefits for economic growth and individual well-being.

The data is collected at the wearable via the various sensors. For example, bioimpedance sensors can measure the heartbeat or a GPS sensor can capture position data. Very often, the data is determined without “active” to do the user, for example, heart rate. The data is usually collected automatically and transmitted to the “evaluation device” (smartphone, notebook or to the cloud). So that an evaluation or linking of the data can take place afterwards. The following sensors are very often part of wearables:

The amount of data plays a not insignificant role in the transfer. In 2014, wearables caused 15 petabytes of traffic, and Cisco forecasts a data volume of 277 petabytes by 2019. Also, the number of devices will increase dramatically, says the same study by Cisco, that in 2014, 109 million devices and 2019 578 million devices will be connected. Of course, in addition to the amount of data, the transmission speed is also an important factor. There are currently several standards that have different levels of diffusion and transmission speed.

It is a technology for identifying objects. The data acquisition takes place via radio transmission. The development of RFID technology began in the 60s. RFID systems have been used in the past mainly for theft prevention. The then high cost of the chips, however, the technology could not expand on other levels. Thanks to more cost-effective components and a massive investment in this technology, RFID systems can now be found in various areas such as ski passes, the textile industry and means of payment. An RFID system consists of 2 components:

In the health environment, RFID transponders are used for documentation purposes. Transponders equipped with temperature sensors are mounted on blood preserves and document the temperature profile. It is thus possible to check whether the cold chain has been maintained. 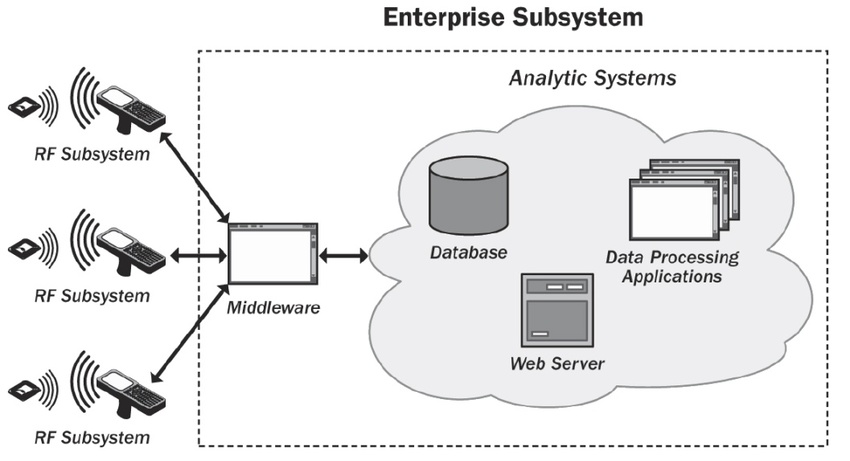 RFID transponders rely on their own communication protocols because they do not have a microcontroller installed for communication via Internet protocols. The task of transmitting information via the Internet is handled by the RFID reader. The reader acts as a gateway and transmits the data using TCP and HTTP protocols.

Bluetooth was developed in the late 1990’s to replace cable connections between peripherals such as headsets. Communication between Bluetooth devices takes place according to the master slave concept. When devices pair, they are combined into a piconet. The first device to build the piconet becomes the master and can contain up to 7 slave devices. The master has control over the piconet and is able to give the slave devices the right to send. Main applications of Bluetooth are:

Articles Related to Wearables and Internet of Things : Part II