Advertisement
You are here: Home » Influence of the Internet of Things (IoT) on Retail : Part I
Advertisement

The inclusion of the term Internet of Things in the Oxford Dictionary shows that this technology is becoming increasingly integrated into people’s everyday lives. The basis for the rapid development is not the technology itself but the progress in the hardware industry. Area. Almost every year, for example, a doubling of computing power in the area of ​​smartphones is achieved, which extends the conceivable application areas of the devices and simplifies networking. So-called wearables are constantly connected to the Internet and can thus, for example, transmit a lot of information about the habits of the user. In the end, the Internet of Things represents a complete networking of everyday objects. 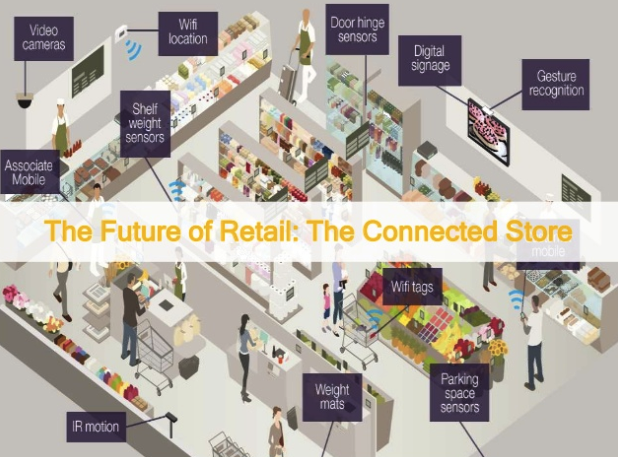 Fundamentals of the Internet of Things (IoT)

The Internet of Things (IoT) describes the networking of objects with the Internet to allow an exchange of information between them. The term goes back to co-founder of the Auto-ID Center, Kevin Ashton, who presented it in 1999, during a presentation on RFID integration in the supply chain of US consumer goods group Procter & Gamble. IEEE (Institute of Electrical Engineers and Electronics Engineers) forecasts around 100 billion networked items by the year 2020, whereby the nature of the item can vary greatly. Networkable objects include, for example, machines, televisions, refrigerators, product packaging, heaters, lighting, vehicles or cameras, as well as computers, tablets and smartphones.

The development of smartphones has significantly accelerated the miniaturization of electronic components and today enables the installation of the smallest computer components, such as WLAN antennas or RFID tags, into objects to be networked. An item is considered networked or smart if it is equipped with information and communication technology and connected to the Internet. Everyday objects are thus given a new quality and can, for example, use sensors to perceive their context, network with each other, access Internet services or communicate with the user.

Thus, many real world aspects can be analyzed in unprecedented levels of granularity and at vanishing costs. For example, complex processes can be understood in detail, which can lead to rational steering and management. By responding to events of reality automatically, quickly and in an informed manner, not only do new opportunities arise in dealing with complex or critical situations, but this also allows the optimization of diverse business processes and the provision of completely new services, which, through the timely interpretation of data from the physical world, yield economic and social benefits.

Radio frequency technology for identification purposes, RFID, is considered a key technology on the way to the Internet of Things (IoT). By means of an RFID infrastructure, object and process information can be recorded and transmitted without contact and without visual contact. An RFID system always consists of two components: a detection device and at least one transponder. Such a system is then usually connected to a computer with appropriate applications to process the read data or to provide the data to be written.

The detection device can be either a pure reading unit, but also a combined read/write unit and consists of two function blocks: the controller and the high-frequency module.

The control of a detection device is used for communication with the application software and the execution of its commands, the coordination of the communication process with a transponder and the signal coding and decoding. In more complex systems, the controller also adopts the anti-collision algorithm, the encryption and decryption of the data to be transmitted and the processing of the authentication between the transponder and the acquisition device.

Detection devices differ mainly in their size and design. While in a mobile handset, for example, the high-frequency module and the controller are combined in one device, they are usually separated in an “RFID gate”. An RFID gate is a collection of interconnected capture devices that can automatically register incoming containers, for example.

An RFID transponder (or RFID tag) represents the actual data carrier and consists of a coupling element and an electronic microchip. The coupling element may be a coil or an antenna. As long as the transponder is not in the vicinity of a detection device, this behaves completely passive, since in most cases no separate power supply (eg by a battery) is present. However, if the transponder is located within the high-frequency transmission field of a detection device, it is activated and supplied with clock and energy. Thus, data can be exchanged between the two components via radio waves.

RFID transponders come in a variety of designs. A widespread design are so-called smart labels in which the coupling element and the microchip is applied to an adhesive film. These labels can be inexpensively and massively attached to a wide variety of products and goods. An application often takes place in logistical processes. Furthermore, RFID transponders are often found in contactless chip cards, such as bank cards. Since the transponders can be introduced directly into other materials such as plastic with modern methods, this provides good protection against external influences such as pollution, extreme temperatures or other adverse environmental conditions that are common in industry.

Near Field Communication, or NFC, is a transmission standard that enables contactless data exchange over short distances of up to 10 cm. NFC is based on RFID technology and offers secure data transfer. The NFC Forum, founded by Nokia, Philips and Sony in 2004, provided standardization and further development of NFC specifications. Within the maximum distance of about 10 cm, the NFC technology offers a data transfer rate of up to 424 kbit/s and operates at a frequency around 13.56 MHz.

In contrast to conventional contactless transmission options, which only work in active-passive communication mode, NFC technology allows three different application modes to be used. The active-active mode (peer-to-peer) is a bidirectional data connection between two terminals. By a brief merge of this, data such as contacts, notes or photos can be exchanged. The active-passive mode enables a terminal to read out or write to a passive RFID transponder. In the passive-active mode, the otherwise active terminal behaves like a passive transponder (eg like a contactless credit card). Among other things, services such as contactless payment are realized with this method. In addition to the direction of the data exchange, there are differences in the generation of the necessary radio frequency field.

Especially in the case of communication or information transmission via RF waves, there is a risk of access by unauthorized third parties. A potential attacker could use an antenna to use the transmission signals in this transmission process. This requires the know-how of the attacker to know how to extract the data from the RF field and what equipment is required. The most important criterion in interception is the distance, since it depends on different parameters how close the attacker must come to get a usable RF signal.

The Global Positioning System (GPS) of the US Department of Defense allows the user to accurately determine their own geographical position. The system consists of 24 GPS satellites that permanently emit a time-dependent code required for terrestrial location. To use these signals, the user needs a device with integrated GPS receiver. This receiver can calculate the exact distance to it from the received satellite signal. To calculate your own geoposition on the ground you need the signal from at least three satellites and for the position in the space of at least five satellites. Possible interferences are taken into account in the calculation and corrected immediately. In this current smartphones is about 1-3 meters. GPS technology enables other technologies, such as location-based services.

Since GPS technology is not technically usable in buildings, companies like Google are trying to determine their position in buildings (eg in shopping centers) using a variety of access points based on WLAN or Bluetooth technology. Once the user receives three such signals, trilateration can determine its position.

Location Based Services, LBS, are services that are provided via mobile communication techniques in conjunction with the current geoposition of the user. SLocation-based services as a service integrated on mobile devices that provides further information about the current position and thereby offers the user added value. The user therefore needs a mobile terminal with an integrated positioning module for its use. Such a module, which generally uses the GPS technology (Global Positioning System), is now installed in all popular smartphones.

In order to use a location-based service, the user sends a request, together with the current position data, to a location service provider, which acts as the provider. The request is then processed by the provider and the response is sent to the user. A distinction is made between the pull method and the push method. The difference between the two methods is the way the data is supplied. In the pull method, the user explicitly requests information or the provision of a service. This can be, for example, the request for the nearest restaurant. By contrast, the push method independently sends the user information or provides a service.

Bluetooth technology enables wireless communication between mobile devices. A major driver of Bluetooth development has been the desire to replace wired connections between devices. The companies such as Nokia and Intel took over this technology and drove the further development. Finally, in 1998, the first Bluetooth standardization took place, which was developed by a group of companies including IBM, Nokia and Intel.

In order to be able to communicate with the Bluetooth technology, the terminals need a corresponding Bluetooth chip. The connection itself is then divided into three classes, with the second class being the most widely used among mobile terminals (eg smartphones). The different classes can be distinguished primarily according to their maximum achievable range. The first class offers a range of 1-3 meters, second class ranges of up to 10 meters and third class ranges of up to 100 meters. The use of Bluetooth technology makes it possible, in the context of the Internet of Things, to use small signal points called beacons. These are based on the fourth Bluetooth version and offer, in particular due to the low energy consumption, a variety of uses.

Conclusion from this Part

Retailers are any organization that sells to consumers or trades with consumers. These organizations source the goods from different manufacturers and combine them into a finished assortment, which is then sold to the end user. As a consumer, all non-commercial customers are counted, because commercial customers are served by the wholesaler and are therefore not part of the retail trade. Institutional retail consists of three main parts: brick-and-mortar retail, mail order (Internet shops), outpatient and semi-stationary trade.

Tagged With influence iot , retail industry OR (retail AROUND(20) industry)

Articles Related to Influence of the Internet of Things (IoT) on Retail : Part I

Cite this article as: Abhishek Ghosh, "Influence of the Internet of Things (IoT) on Retail : Part I," in The Customize Windows, August 16, 2019, December 8, 2021, https://thecustomizewindows.com/2019/08/influence-of-the-internet-of-things-iot-on-retail-part-i/.
Source:The Customize Windows, JiMA.in