Advertisement
You are here: Home » Influence of the Internet of Things (IoT) on Retail : Part IV
Advertisement

This is the forth part on the series on Internet of Things (IoT). The use of IoT technologies in retail enables a multitude of new opportunities and offers great benefits. At the same time, however, it also brings dangers with it. The main benefits are the economic advantages for the dealer and the added value for the customer. However, the security of the Internet of Things, as well as the protection of their own data and those of customers, are potential risks that must be considered. The economic benefits as well as the IT security requirements are discussed in this part and conclusion will be drawn to end this series.

The use of IoT technologies in retail enables a multitude of new opportunities and offers great benefits. At the same time, however, it also brings dangers with it. The main benefits are the economic advantages for the dealer and the added value for the customer. However, the security of the Internet of Things, as well as the protection of their own data and those of customers, are potential risks that must be considered. The economic benefits as well as the IT security requirements are discussed in this chapter. The greatest potential lies in the following areas:

Automated Payments: With the use of automated payment transactions as described, the estimated profit has a potential of $150-380 billion. The time required for payment can be reduced by 40-88%. This has the immediate effect that the cost of cashiers can be reduced by 75%. This is based on the assumption that 2 trillion minutes will be spent on payment transactions in 2025 and that the cost of cashiers will be 3% of the total cost of a retail store.

Personalized real-time offers during shopping: McKinsey Global Institute forecasts revenue growth of 3-5% through the use of personalized real-time offers. This forecast is based on the assumption that brick-and-mortar retail sales in developed and emerging countries in 2025 will total approximately $7 trillion. The total economic potential of this marketing strategy is estimated at $79 to $348 billion.

Optimizing Merchandise Arrangement: An optimized commodity arrangement and its ongoing analysis and improvement, according to the McKinsey study, will provide $79-158 billion in economic potential by 2025, assuming annual fixed-cost operating costs in brick-and-mortar retail at around $7 trillion Dollars. A key reason for this is the potential increase in the profitability of a business by up to 5%. In the areas of logistical processes in stationary retailing and online trading, the economic benefits are largely based on increasing product availability, optimizing stock levels and minimizing unsalable goods, eg through expired food. Complementary to this is also the accelerated acceptance of goods through automatic detection, as well as the reduction of inventory costs. For the processing of the goods acceptance and the regular inventories a considerable amount of personnel was required so far. This effort can be significantly reduced for example by the use of RFID technology and is reflected in lower personnel costs.

Whether the widespread introduction of such a technology always has a positive effect, however, seems to be controversial. Contrary to the productive values, the introduction costs of an RFID infrastructure are also mentioned as the biggest barrier for establishing production and logistics. There seems to be no general consensus on this subject.

Security in the Internet of Things

For security on the Internet of Things, no uniform standards or special security models have yet been defined. Due to the rapid development in the IT industry, from autonomous vehicles over industrial plants to home systems, which are all interconnected and exchange data, IT security can not keep up. Computing in everyday life is becoming increasingly important, with hardware security being kept to a minimum. Even for several years, common safety principles are not taken into account in order to accelerate development processes. Simple things, such as strong passwords, are not included in the development of the products.

The poor IoT security is due to two major issues. On one hand, manufacturers and service providers want to bring new devices and services to market as quickly as possible, with the focus during development being more on design than security. On the other hand, the developers, who have their roots in the development of IP network-independent systems, do not think about novel control mechanisms. IP-network-isolated systems are obsolete, with network-connected systems increasingly being integrated into industrial mechanisms and managed remotely.

This lack of security can enable or facilitate cyber attacks on Internet of Things devices. However, these attacks are not only insignificant attacks, for example on the thermostat of a private person, but also attacks on critical systems that, from a data protection point of view, manage and process sensitive customer data. The increased use of IoT equipment therefore increases the attack surface for exploits and malware.

However, IoT security concepts can not simply be derived from security models for computers or smartphones. But most of these wearables have too little processor power or too little storage space. For example, with many IoT devices, it is not possible to install specific updates or security patches, install antivirus software, or implement firewalls. A certain standard, as it already exists in the medical, automotive or manufacturing industry, has yet to be developed.

To protect these wearables despite the lack of standard, retailers, but also individuals, take fundamental protective measures. For this purpose, for example, secure web interfaces are used or paid attention to strong authentications. In addition, IoT migrating data to the network must be adequately secured during both transmission and storage. This includes the encryption of data packets during data transfer from device to device, device to application and device to cloud. If customer data is stored or processed, the end user must obtain clear information from the product provider about what information is collected and how it is protected from possible access by third parties. 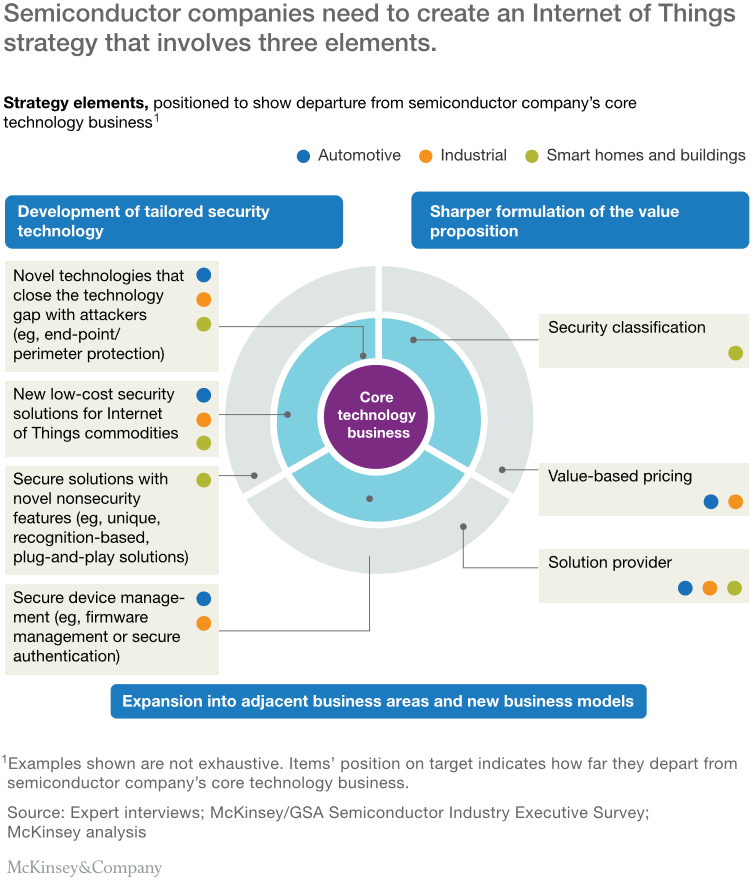 The illustration is by McKinsey & Company.

In summary, the impact of the Internet of Things on retailing has increased in recent years, but there is still enormous growth potential, which should be exploited in the coming years. The necessary technologies have been constantly adapted to today’s requirements, thus enabling a variety of application scenarios in the retail sector.

Particularly in the logistics processes along the supply chain, a high level of acceptance of the Internet of Things or its technologies can be seen both in stationary retail and online retailing. This is made clear, for example, by the fact that the majority of industry experts assume that RFID technology will establish itself as the standard technology in these areas by 2019 and replace the existing barcode-based systems as far as possible. In stationary retailing, this can in particular increase product availability, as well as reduce the stock required and shrinkage. In the online trade, the customer benefit can also be increased, since, for example, information gained from services such as shipment tracking, can be integrated into the ordering process and the customer can thus be offered additional added value. Only a few IoT projects have been implemented in marketing and retail space sales. The reasons for this can be the high costs, since the necessary technological infrastructure in the imaginable scenarios are all quite expensive and subject to high demands. Here, too, the crucial difference to the logistics processes and the RFID technology is apparent. The greatly reduced costs of the RFID tags favor, for example, the distribution. In online trading, the willingness to implement future-oriented IoT projects in the areas of sales and marketing is also still very low. Leading here is the online retailer Amazon,

The benefits of using the Internet of Things in retail are reflected primarily in increased customer value and economic metrics. One of the biggest risks to consider is the high demands on IT security and privacy. The success of the Internet of Things in retail depends heavily on customer acceptance. One of the basic requirements will be to create uniform standards and to offer customers trustworthy solutions. In addition, the infrastructure hurdles must be overcome. As a result of the further development of mobile radio standards, it is important, for example, to ensure widespread, mobile broadband coverage with high transmission rates. Thus, from the year 2020, a huge increase in the Internet of Things will be forecast again.

It is already becoming clear today that the Internet of Things extends far beyond the consumer sector and networked household appliances, since convenient ordering, tracking and payment has already become the standard among many users.

Tagged With New Things in IoT language:en , retail sector OR (retail AROUND(20) sector)

This Article Has Been Shared 580 Times!

Articles Related to Influence of the Internet of Things (IoT) on Retail : Part IV