Advertisement
You are here: Home » What is Radio-frequency Identification (RFID)?
Advertisement

Radio-frequency Identification or RFID uses the help of electromagnetic waves the allows automatic identification and localization of objects and living beings. Radio-frequency Identification or RFID is also used in authentication technologies. A RFID system consists of a transponder, which is located on or in the object or living being and includes an identifying code and a reader for reading the identifier. Radio-frequency Identification Tags or RFID tags can be as small as a grain of rice and can be implanted, such as in humans or domestic animals. In addition, there is the possibility RFID transponder using a special printing process of stable circuits made of polymers. The advantages of this technique arise from the combination of small size, low-profile selection opportunity (like in identity cards) and the low price of the transponder. This new technique can replace the still widespread barcode.

The coupling occurs by the reader generated magnetic fields or by short-range high frequency radio waves. Thus the data are transmitted to the transponder with energy. Only if long distances are to be covered and the cost of the transponders are not very critical, active tags with their own power supply can be used. The reader includes a software (a microprogram), which controls the reading process itself and a Radio-frequency Identification middleware to interface with other computer systems and databases. The first RFID applications have been used at the end of the Second World War.

The transmission of identification information is displayed on systems that are standardized according to ISO 18000-1 ff, as follows: The reader (reader), depending on the type can optionally write data, generates a high frequency alternating electromagnetic field, which the RFID transponder ( RFID tag) is exposed to. The shot of radio frequency energy is used during the communication process on the antenna as a power supply for the chip. For active tags, the power supply can also be done by an internal battery. In semi-active tags, the battery takes only the supply of microchips. The activated microchip in the RFID tag decodes the commands sent by the reader. Encoding and modulating the response of the RFID tag in the electromagnetic field radiated by the non-contact field weakening or anti-phase short-circuit reflection of the transmitted field from the reader. For this tag transmits its own unchangeable serial number, more data of the object marked or other data requested by the reader information.

For more complex applications, cryptography modules or external sensors such as GPS may be integrated into the RFID transponder. The RFID transceiver units differ in range of functions of the control functions and appearance. So it is possible (for access control) to integrate it directly into shelves or entryways.

The size, antenna, the battery and the housing varies according the need of usage. The shape and size of the antenna is dependent on the frequency or wavelength. Depending on the required application transponders comes in various shapes, sizes and classes of protection are offered.

Passive RFID tags powered from the radio signals of the detective device. With a coil as a receiving antenna by means of induction is similar to a transformer, a capacitor is charged, which makes it possible to send the response to the interrogation signal. This allows a more sensitive reception of the response signal, undisturbed by the interrogation signal reflections from other devices. Due to the low cost per transponder, typical applications are those where many transponders are needed, for example for product labeling or identifying documents. Often this is done with ranges of only a few centimeters to keep the number of the responding transponders small.

The older types of RFID transponders transmit their information, as in the standard ISO / IEC 18000 and is provided as plain text. Newer models also have the opportunity to present their data encrypted to transfer. For special RFID tags, for example, which are used to control access of external mobile media security, the RFID information are AES encrypted with 128-bit standard. 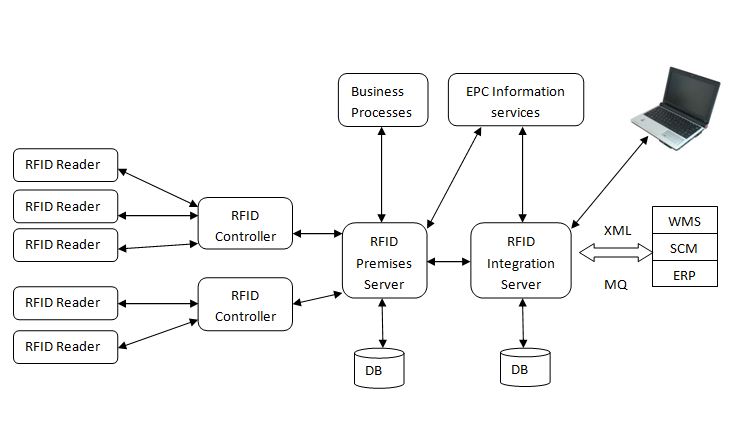 In general, logistics is the main heading for the area. Logistical has problems cutting across all the sectors. There is a huge potential for rationalization exploit. The breakthrough to general propagation fails generally to problems, the business case across company boundaries to budget time. Some institutions also hope to improve monitoring of passenger and goods. The technical effort and costs on the RFID side are manageable. To summarize the usage areas :

The risk of RFID technology for example is the loss of information, i.e. the individual has no more influence on what information will be disclosed. Therefore, the upcoming massive use of RFID transponders is under privacy concern. To avoid this, some critics suggest before the destruction of the RFID tag after purchase. This could (similar to disabling the anti-theft ) happen at checkout. A proof that a transponder really be destroyed or storage was actually deleted, the consumer is usually not possible. Furthermore, the integration of additional, undocumented or transponder memory cells is conceivable. For the consumer, an RFID tag becomes a black box , which is why some call for a continuous monitoring of the entire production process.

A quite well known, amusing encounter happened between Richard Stallman and United Nations security at the World Summit on the Information Society in Tunis. It seems that RFID technology, which Stallman opposes for privacy reasons, was used in the identification badges for the conference. Richard acquired an entire roll of aluminum foil and wore his foil-shielded pass prominently. (Citation is From the blog: “You can’t give Richard a visible RF ID strip without expecting him to protest”.) Aluminum foil can be used to substantially hinder RFID, but RFID Shield is a protective sleeve that is more effective and that prevents anyone from reading private information stored on RFID cards.

Articles Related to What is Radio-frequency Identification (RFID)?