The term smart city is an emerging concept, and therefore its meanings is subject to constant revision. It is also a term, which is being used as a marketing concept in the business field, in relation to development policies, and in relation to various specialties and topics.

Smart city sometimes also called efficient city or super efficient city, and refers to a type of urban development based on sustainability which is able to adequately respond to the basic needs of institutions, companies, and of the inhabitants themselves, both economically and in the operational, social and environmental aspects.

The Smart City concept arises from the evolution of the so-called Digital Cities, involve companies from different sectors (telecommunications, security, construction, audiovisual, consumer electronics, electrical equipment, IT, health, education, etc., together with governments of the regions and cities, to create Digital Community. The result of this multisectorial meeting led to the ephemeral presentation of a city which includes housing, bank, hospital, hotel, tax office, post office, government offices, school and everything in an urban environment with public lighting, traffic lights, urban furniture and everything that would make up a real city, but in a presentation of a cinematographic format. 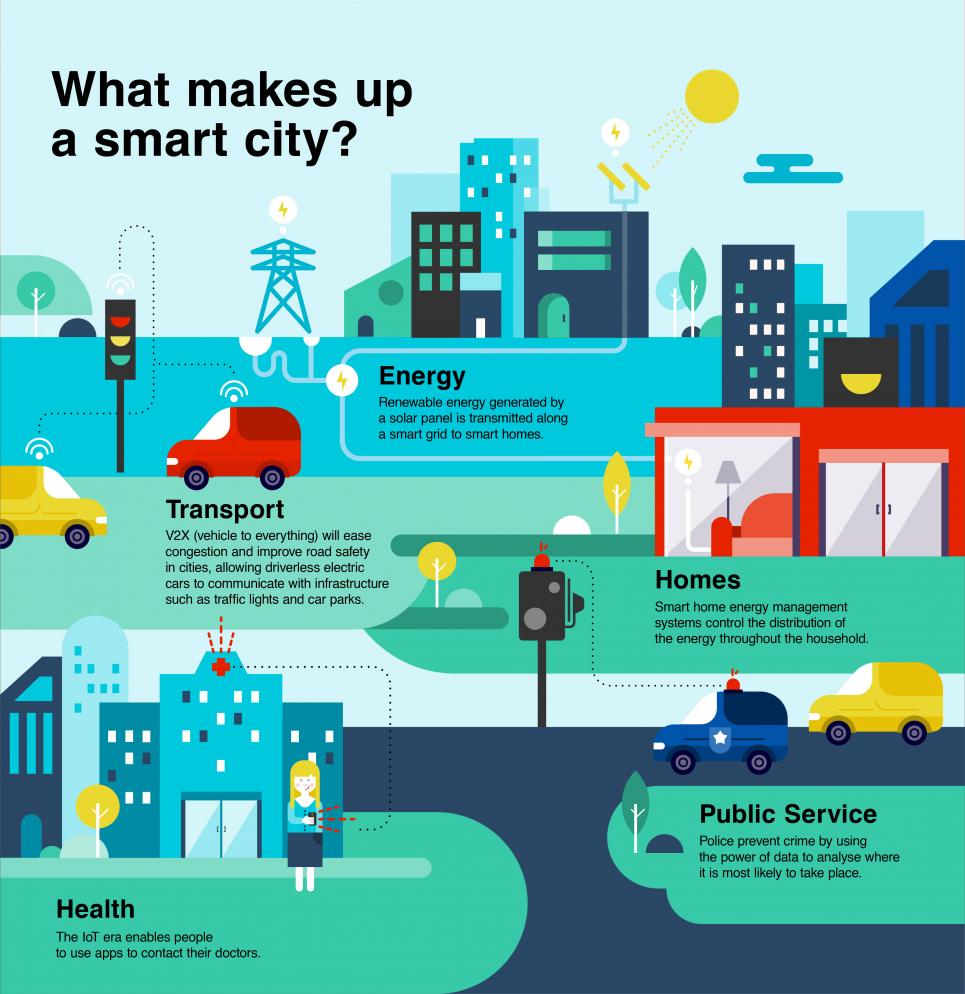 Smart Cities, given its natural origin of Digital Cities, is based on the intense use of Information and Communication Technologies (ICT) in the provision of high quality and warm public services, safety, productivity, competitiveness, innovation, entrepreneurship, participation, training and training.

A city or urban complex can be qualified as intelligent to the extent that the investments made in human capital (permanent education, initial education, secondary and higher education, adult education etc), in social aspects, in energy infrastructure (electricity, gas), communication technologies (electronic, Internet) and transport infrastructure, contemplate and promote a high quality of life, a durable and sustainable economic and environmental development, governance participatory, prudent and reflective management of natural resources, as well as a good use of citizens’ time. Modern cities, based on efficient and durable infrastructures of water, electricity, telecommunications, gas, transport, emergency and security services, public facilities, smart buildings for offices and residences, etc., should be aimed at improving the comfort of citizens, being increasingly effective and providing new quality services, while respecting the environmental aspects and the prudent and declining use of non-renewable natural resources.

Currently, the concept of city (more) intelligent, is widely used in marketing by experts in commercial partnerships and urban agglomerations. However, in many cases, emphasis is placed on only one aspect, which to a large extent betrays the concept that is being developed, which has an important holistic and integral component.

Indeed, a city or a territory considered to be intelligent is mainly manifested by its multidimensional and multifaceted in terms of actors, as key domains (transport, energy, education, health, waste, four surveillance, economy etc) , and in the development and use of technologies. Naturally, the main actors of the private sector involved in a project such as the analyzed city, territory, neighborhood or smart building, are the industrialists and entrepreneurs of key sectors, such as energy, water, transport, and services, as well as leaders of public telecommunications companies and infrastructures, publishers, logistics providers of management support, as well as administration and consultancy.

Interactive and mobile relationship between users : First of all, intelligent spaces are characterized by good communication and horizontal interaction between users, who are also great consumers of information on aspects linked to daily and professional life (travel, energy consumption, services public, social and professional events …) and also producers of information through social networks, weblogs, and mobile services (expression of opinions and qualifications, enrichment of shared knowledge bases – Wikipedia type -, co- responsibility in relation to services individual …).

Optimized space supervision : A center or platform with the ability to intercommunicate the set of objects and actors that comprise it, thanks to telecommunications networks (fast and with good bandwidth), and the existence of a diversified set of captors and service nodes. The whole of this infrastructure contributes to an efficient collection and distribution of data, which in particular are necessary and useful for the governance of the intelligent space, as well as for the accurate analysis of situations that allow us to adapt and reconcile resources with needs, and for the study / control of budgets in order to achieve efficiencies, etc.

Development and promotion of new forms of cooperation : The intelligent character of the progress of the different procedures, lies in the ability to conduct cross-cutting projects that go beyond the logic, the modus operandiof the collectivities, and of the different competences handled by them. This favors a good coordination dynamics, allowing diverse associations and articulations between public or intergovernmental actors (communal, intercommunal, general and regional councilors, national or international development agencies …) with private actors (industrial sectors of the telecommunications, energy, transport, service companies in the IT sector, public works entrepreneurs, consumers …), from which new forms of cooperation and new sources of efficiency should emerge, such as mutualization.

Articles Related to What is Smart City?