Virtual SIM is a cloud-based mobile service number which can be used from any device using application or code. In an 8 years old previous article, we discussed about SIM card. Virtual SIM is software based cloud service. Unlike the traditional SIM cards, virtual SIMs are not physically attached to a mobile. SIM cards are chips which help the mobile networks operators to control fees for communication and also track their users. Virtual SIM escape the gaps and does not bind to a particular country. Virtual SIM are SIM card emulations. The purpose of the concept is to provide affordable mobile phone numbers. The are 3 types of SIMs – Non-programable, Programable, Soft SIM.

As virtual SIM actually net active internet via Wi-Fi, what it does is placing call via VoIP, allowing to use WhatsApp etc while protecting privacy. It is probably obvious that travel and communication becomes at the rates of the home operator, simply because Virtual SIM also works as a VPN. When there is no internet connection, the calls are diverted to mobile network or voice mail.

Apart from application of virtual SIM for the consumers, it is quite useful in DIY electronics. Previously, in a coding guide related to IBM Watson IoT, we pointed towards Twilio for sending text message from ESP32. So, from our example, we simply do not need even a traditional mobile device for using the virtual SIM. 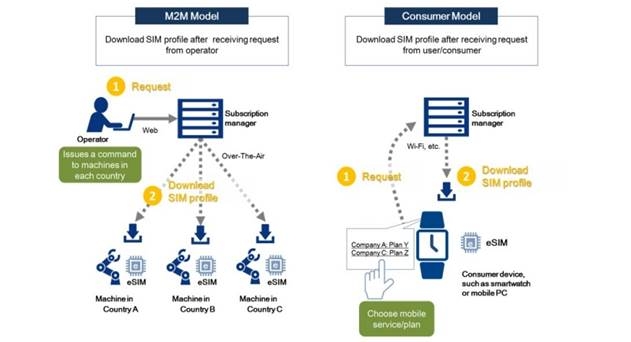 Virtual SIM Card Alliance (VSCA) is used by the carriers who provide virtual SIM card. Countries such as India, Russia, China has country wide physical SIM card sellers at quite cheaper rate. That is not the situation all over the earth. Some of the countries has easily available free Wi-Fi to connect to internet but very less shops which sell the SIM cards. With this background, it will be obvious that Virtual SIM Card Alliance (VSCA) naturally released Remote SIM Provisioning specification.

Google Fi is a known project around virtual SIM :

The entire thing is carrier dependent and till now, they are reluctant to move towards software based. It is probably obvious that virtual SIM forcing many changes in the telecommunication industry including forcing the need of wider coverage of Wi-Fi.

SIM cards for M2M in IoT is still physical, single SIM for global IoT need. These are also known as MIM Card, which abbreviates as Machine Identification Module. It is similar to that of SIM card but basically for the GSM/GPRS/3G/LTE modules.

This Article Has Been Shared 927 Times!

Articles Related to What is a Virtual SIM?