Advertisement
You are here: Home » Navigating the Benefits of Docker Registry
Advertisement

Docker is an operating system-wide virtualization platform and software containerization platform. It allows us to create an application and package it along with its dependencies and libraries in a container. This software container, in turn, can run on other machines. We have many in-depth articles to get started with Docker, such as Analysis of Docker in DevOps, Docker Tutorial For Beginners.

Differences Between Virtualization and Containers

In reality, we are talking about an evolution of the concept of virtualization with important differences that incline the balance on the side of the containers. In essence, the same tasks could be performed using virtual machines, but the result would not be very efficient. There are several benefits of setting up a Docker registry. We can use a Docker registry to simplify resources and make the framework operating more efficiently. OpenVZ Versus Docker is good topic to further analyze the differences.

Developing virtual machines to recreate an operating system is somewhat expensive and requires extensive resources, such as RAM, processing capacity and storage – since the virtualized operating system runs on the host operating system, and will have its kernel and a set of libraries and dependencies. The resources used by each virtual machine are finite, but they are resources that are subtracted from the total capacity of the machine that supports them. Therefore, it is not a very efficient solution in some contexts. In the case of virtualization, we abstract from the hardware. It is a subtle but decisive difference. This abstraction of the operating system implies that the container will have the necessary resources so that the application it contains can be executed in any system as long as it has the necessary tools. Virtualization at the operating system level is much more efficient. We work directly with the OS of the machine which will execute the containers. Each container holds the specific libraries for the application and does not share them with other containers. They are self-contained units, which makes them faster and more efficient than virtual machines. An extra layer is needed to manage the containers. It is called a containerization layer and it allows the creation and execution of the containers in our operating system.

Docker and its Containers

Docker is a virtualization platform at the operating system level. Now we know what the containers consist of, so we can say that with this platform we can create different containers for our applications and their dependencies. In this way, this application can run without any problem in any environment. In other words, it is 100% portable.
Each application runs in an independent container with, as we have said, the libraries and dependencies necessary to function normally – that makes them independent of the version of the operating system or the versions of libraries and dependencies available in the OS, or even that these do not even exist in our system – which ensures the perfect isolation of that software. That’s why containers give developers peace of mind that they can develop and test applications that don’t interfere with any other. The advantage of Docker is very obvious. It is possible to encapsulate the entire working environment so that developers can be working on their local server with the security that, when the time comes to put the application into production, it will run with the same configuration on which all the tests have been done. Other clear advantages of Docker are its lightness – by not virtualizing a complete system the consumption of resources is minimal, saving around 80% of these resources – portability and self-sufficiency, as Docker is responsible for the management of the container and the applications it contains.
It is, therefore, a secure testing environment that, thanks to its characteristics, provides sufficient isolation to guarantee the developer the execution of his application in the original environment, without worrying about doing anything to guarantee portability.

A Docker image is a template which we use to launch the equivalent of a Virtual Server image. In other words, image is a collection of filesystem layers and metadata. A Docker repository stores the images. Docker Hub is a centralized location for the images and repositories. We could also set up a repository to host Docker images anywhere. Such repositories may be owned by a person or by an organization. They can be public or private. Images in the repository are marked by tags. The registry is often mistakenly thought same as a repository. A registry is a collection of repositories with indexes, access control rules (ACL). The Docker clients obtain the images from their repos via API. So, a Docker registry is a storage and distribution system for the Docker images which is organized into Docker repositories. The same image of different versions is identified by their tags. A repository holds all the versions of a specific image. Essentially the registry allows the Docker users to pull and push the images. DockerHub is the Docker’s default public registry instance. There are other public and private registries available.

So, we can use a Docker registry which is private and not Dockerhub. A private registry, may give us some benefits which includes : 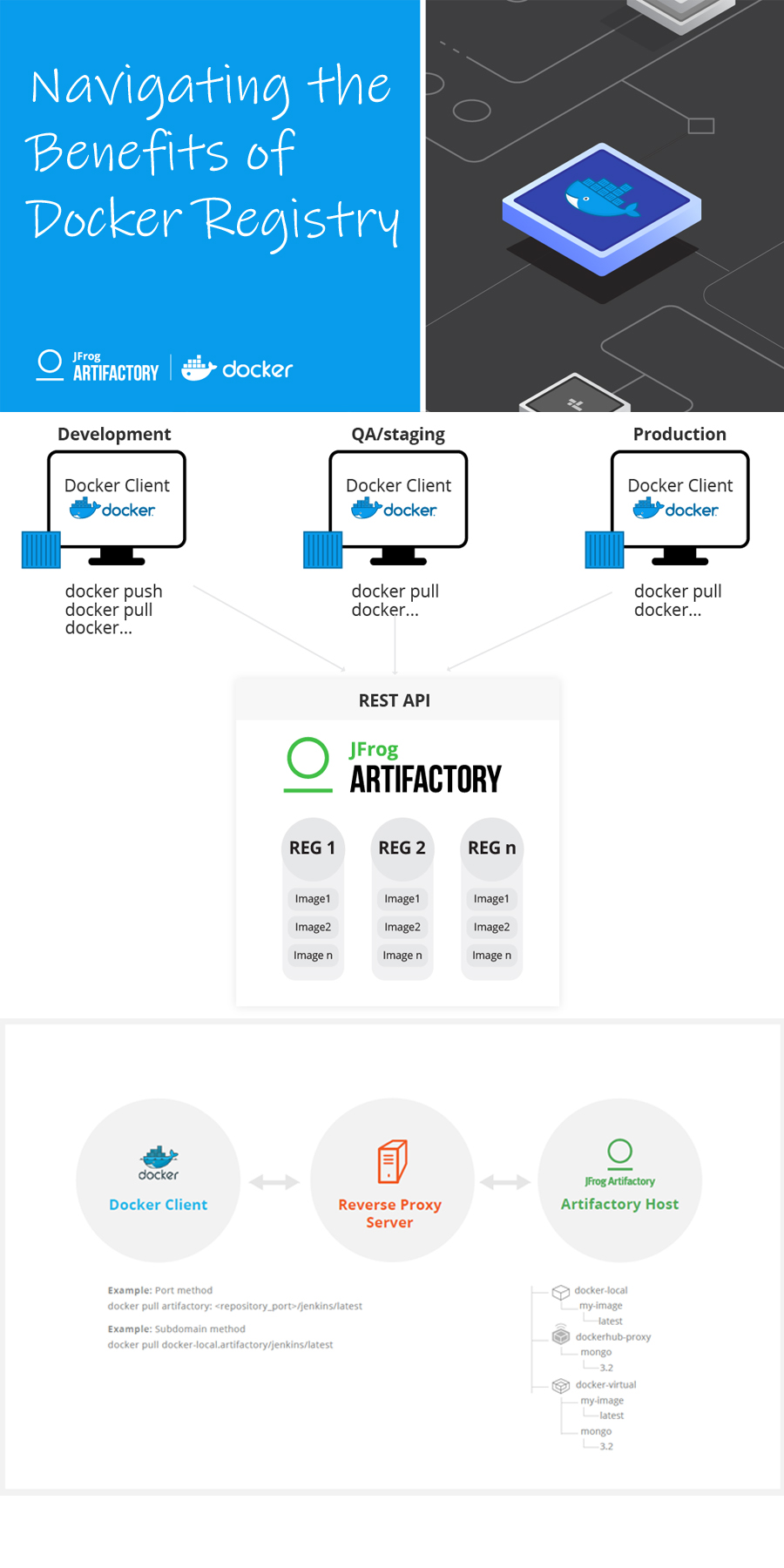 The open-source version of Docker Registry is not optimized for enterprise-grade security. In most situations, it is not cost-effective to work behind the creation of own Docker Registry to work as the third party services. We can use multiple Docker repositories to promote immutable containers through software development and testing pipeline. We can proxy the external Docker repositories in the remote repositories for consistent access to Docker Hub via caching. In the end, we can combine all these with our local repositories. Different service providers offer a different set of advantages for target customers. There, are some disadvantages as well. In most cases, the user has to manage the infrastructure and stability is dependent on the plan of the user.

This Article Has Been Shared 201 Times!

Articles Related to Navigating the Benefits of Docker Registry