Launch Galaxy Watch Designer and load some sample to understand how things work. It is not mandatory to connect your watch just for designing. You can connect to watch via Bluetooth. Put your watch in debug mode, turn on Bluetooth on your watch and connect it to your computer.

You’ll see that Galaxy Watch Designer can load graphics of each part of the watch like background (which is the dial), the hands and so on. Samsung has a good guide on using the application :

The watch face area is a circle of 360 pixels in diameter. This is a too-small size for designing on Illustrator or Photoshop. You can use double (720 pixels) or triple size of 360×360 and later reducing their size to 360×360 during saving from Photoshop. You’ll find the default graphics files on a standard installation on Windows PC at these locations :

To add watch hands, after import each of the images, change the “Sync with” setting from the “Rotation Properties” of “Properties” window of Minute, Second etc. Otherwise, the hands will not spin! Notice the screenshot below to get an idea what I am talking about. To get a smooth sweep effect of seconds’ hand, change the “Movement effect” in the same “Properties” window. Also, you need to centre the watch hands by going to the “Align Center” option in the main toolbar.

You’ll get the PDF of the next steps (how to test on your watch and optionally distribute) inside the C:\Program Files\Galaxy Watch Designer directory. 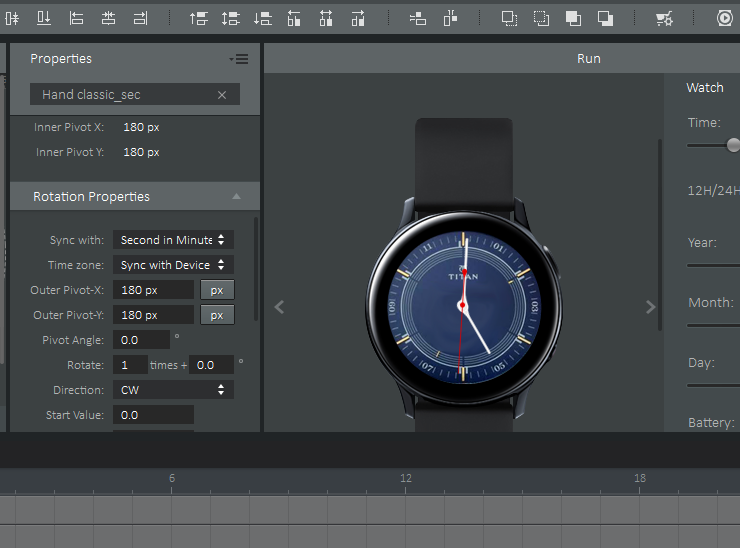 I found another easy way to just clone your existing watch – simply take a series of high-resolution close-up photos of a real watch with hands at different positions and use Photoshop’s tool to remove the hands. Then just separate the score/numbers (index) using your Photoshop skill. Of course, you can only use such kind of watch face for personal usage (it violates the copyright). But, this way gives instant gratification!