An IR blaster emulates an infrared remote control to control devices such as a DVR or VCR, Air Conditioner, Television and so on. IR blaster was a common feature of Nokia’s most of the mid-range smartphones of the 2000 era. Most of the manufacturers (read Samsung) have stopped including this feature at least in the mid-range phones. This is not just another article to join two IR LEDs with a 3.5mm headphone jack. That design is quite basic and has minimal risks.

Most of the IR remotes work within a range of 5 metres. The complexity of the circuit increases when we want to design the IR transmitter for a longer range, such as 10 meters. To double the range from 5 metres to 10 metres, we have to increase the transmitted power 4 times. We can use an IR laser pointer as the IR signal source. To increase the preciseness of direction and the power density, we can place the IR LEDs inside the reflector of a flashlight.

Let us start with a basic idea to turn on a LED when there is audio coming out of the 3.5mm headphone jack. You need a transistor to do it. When enough current will go into the base, the transistor will turn on turning the LED on. A commonly available IC LM3915 is designed to power LEDs to create a visual effect. If you want to calculate with formula, then use :

… and get the value of a resistor. You can use an N3904 transistor, one 420 Ohm resistor, one 1K Ohm resistor and 9V battery power to create such circuit. Coming back to our topic. You need to use minimum the below-shown circuit to create your own external IR blaster : 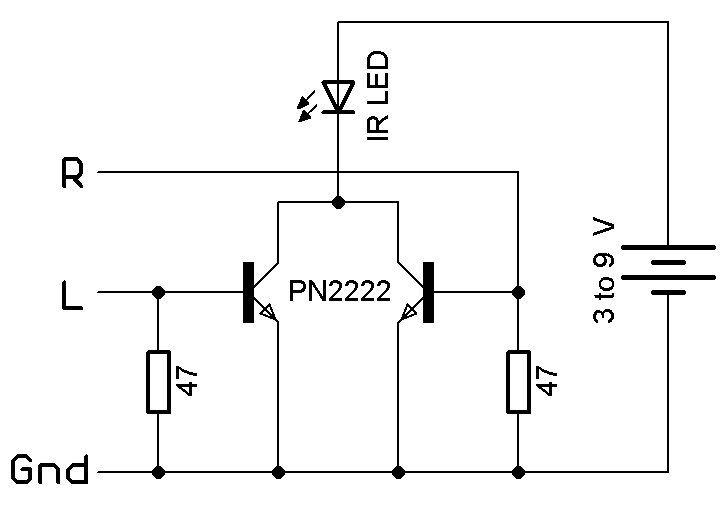 As told above, IR laser pointer will be superior and IR LEDs sold for electronics works will just prove the theory.