On unix-like OS, the pkill command sends a signal to the processes while the pgrep command searches for processes currently running on the system. Originally, the pkill was written for using with the Solaris 7 (1998). kill, killall, pkill, pgrep can be used on all the GNU/Linux OS, MacOS X and Linux shell on Windows 10. The kill signals HUP (1) reloads a process, KILL (9) kills a process, TERM (15) gracefully stop a process. This signal (HUP) was used in the days of dial up modems to let the process know that the serial line had been Hung UP. That convention is been maintained still today. 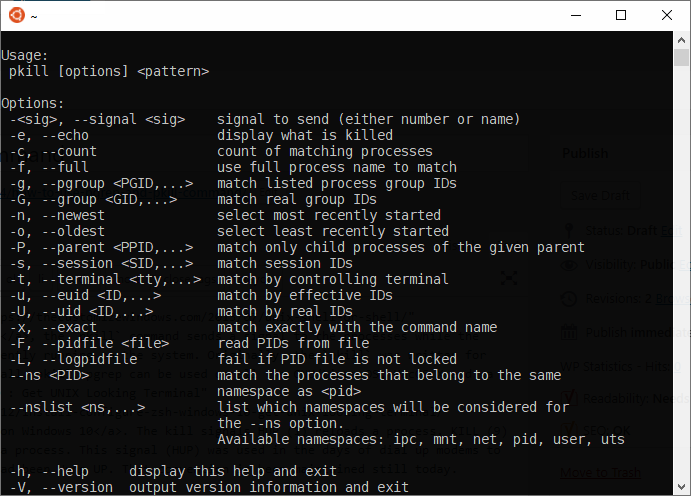 You can run the top command to see the currently running processes and run our example commands. The syntax for the pkill command is :

As pkill uses regular expressions to match, using the pgrep or pkill command to get a list of the matched processes is practical :

xkill is the simplest program to kill a non-responding program.
Actually we can run a longer command to return the process identifier of a named task:

The above is equivalent to :

We can use pgrep to list all the processes which does not belong to a mentioned user (like root) :

pgrep is generally most useful when used in combination with pkill.

This Article Has Been Shared 194 Times!

Articles Related to How to Use pgrep and pkill Command