A cloudlet is a small-scale data centre located at the edge of the Internet to provide computing resources to mobile applications with lower latency. It is a newer architectural element of cloud computing infrastructure of a 3-tier hierarchy: mobile device or IoT hardware, cloudlet, cloud. The cloudlet concept is also known as mobile micro-cloud. The term was first suggested by Satyanarayanan as “a trusted, resource-rich computer or cluster of computers that is well-connected to the Internet and is available for use by nearby mobile devices.”

Many of the smartphone applications divide the application into a front-end client and a back-end server. The front-end mobile application depends on the back-end servers for reasons like speeding up processing. The back-end server of today typically hosted at the cloud datacenter offering benefits such as scalability and elasticity. End-to-end communication involves many network hops resulting in high latencies. Some of the emerging mobile applications require to offload infrastructure geographically close to the mobile device. This method achieves a low response time. The individual elements of this kind of infrastructure are known as cloudlets. A cloudlet has four key attributes: 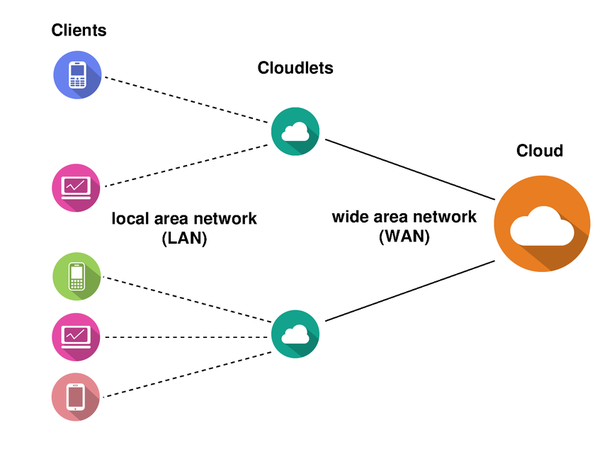 Cloudlet requires the additional deployment of hardware/software. OpenStack++ extends OpenStack to leverage its open ecosystem with a set of cloudlet-specific API as OpenStack extensions. The biggest challenge is ensuring automated provisioning of the cloudlet applications.

This Article Has Been Shared 334 Times!

Articles Related to What is a Cloudlet in Cloud Computing?