In this article, we will discuss the opportunities to add a BLE controlled system of ESP32 in parallel to the central lock fitted by the company which will unlock and lock our cars based on proximity of our smartwatches.
Our regular readers already learned how to use ESP32 Arduino with a buzzer to detect a Samsung Smartwatch. Also, they can track such events on IBM IoT dashboard. The car’s central lock hacking will be like those systems. Most of us can afford up C2 or D segment sedans.

How the central locking works?

The central locking system allows the locking and unlocking of all doors of a vehicle by actuating one of the locks or by remote control. The current designs are electrically operated, usually combined with a radio remote control on the key, so that it is possible to trigger from a distance without direct contact with the vehicle. In combination with remote control, most newer vehicles only have a lock in the driver’s door for cost reasons. Mercedes-Benz and BMW use combined radio and infrared technology. Also, many modern vehicles are automatically locked when they exceed a certain speed (e.g. 8 km/h) to prevent unauthorized persons from opening the door from the outside, for example during traffic lights. The doors are unlocked as soon as the ignition key is pulled out of the ignition lock or in the event of an accident registered by the crash sensors.

Wire the ESP32 as parallel controller

We are assuming that your car already has a traditional central lock system. Depending on the model, you have to hack the electrical system of the lock units to add a parallel BLE circuit with ESP32 to control it. Essentially we are hacking our car at the hardware level. Get a good mechanic to get the wires from the actuator and add diodes on both sets of wires (to stop confusing the existing system) – (1) one is default set (2) another set you are adding. Add a female connector with the wires and get the connector installed inside the glove box. Make sure that your default radio control remote of the car and all the automated features are working fine. If you get a skilled car mechanic, he can do this setup part quite nicely. Now you can add a relay with ESP32 Arduino and connect those actuators of the central lock system via the female connectors. I described a fail-proof theoretical model which will give you a good chance not to mess up the default central locking. There are software challenges with this “dual-mode” parallel model of central locking system like if BLE system locks the door then the car’s system will think the door is unlocked and vice-versa. It is somewhat superior and modern than just a radio-controlled system.

Some manufacturers have a system to start alarm when the car is opened in some way other than with their remote. That alarm system is enough dumb to make a sound if you unlock with own physical key. It is an unwanted feature when the remote is low on battery. You have to nuke that system to keep the things smooth. If you feel that playing with car doors is risky then you can automate the locks of glovebox or ambient light. 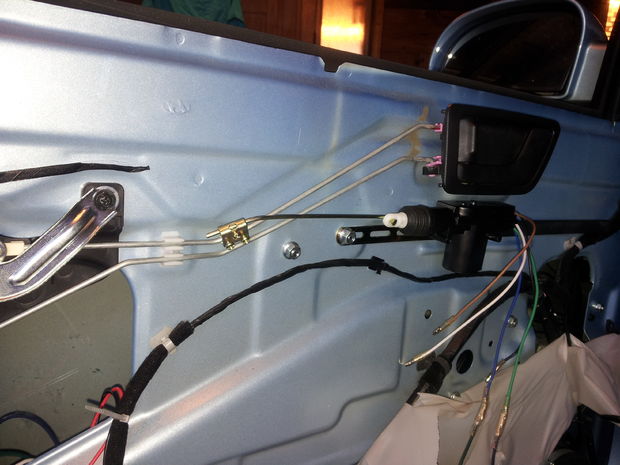 You can see the actuator, the “default wiring” and the mechanical system.

Various third parties sell Bluetooth car central locking systems intended to get controlled from a smartphone. Basis of their operation is the MAC address like our ESP32 Arduino with a buzzer to detect a Samsung Smartwatch guide. They cost around $150. At this moment I lack an idea about the possibility of developing a custom app for a smartwatch to function as a smartphone.

This Article Has Been Shared 627 Times!