Advertisement
You are here: Home » How to Install in WSL 2 on Windows 10 (version 2004)
Advertisement

I have tested the described method on my new HP x360 convertible laptop (Corona gave me a 30% discount). Anyway, do not read the old guides all over the web. Official guides from Microsoft for version 2004 is fully correct just for Microsoft Windows part. If you follow my guide for HP, Dell laptops then you’ll get watermark for using Evaluation Copy of Windows. OEM licenses are for RTM versions. You’ll get info on Windows Version information windows about the date of expiring. If that disturbs later then the support of HP, Dell can fix it. Technically the warnings will go away when 2004 version will officially be allowed for HP, Dell to distribute. However, with such kind of Evaluation Copy of Windows, you should have a backup of the things. I have not noticed any instability with this version.

Continuously press F10 when your HP computer will boot and you will be into the BIOS. Under the Security tab, use the down arrow to select System Security and press Enter. Select Virtualization Technology, press Enter, then Enable it. When you are done, save your changes and exit the BIOS.

Go to Settings > Update & Security > Windows Insider Program. You have to keep the settings to Dev channel for latest work-in-progress code from the engineers. These builds will have rough edges but you’ll not face trouble with WSL 2. You can switch this unwanted thing off after you get WSL 2 in your hand. I tested the other settings, they will not work to bring Windows to our desired version. Version 2004 has great features (it will start with a semi-transparent theme). Version 2004 is looking great beside my Mac and Samsung One UI. Designers of Microsoft Windows worked huge behind the icons, transparency and right-click menu.

Restart the Computer and run update. You’ll see that WSL will get installed as an update. It will take 3-4 hours with good internet speed. Do not disturb the computer except when it will prompt to reboot.

Open up Powershell with admin privileges (right-click on Powershell to run as admin). Run the installation command:

Install your favourite version of Linux (like some Ubuntu LTS version) from App Store. You’ll see a Launch button thereafter completing the download – DO NOT CLICK IT NOW. 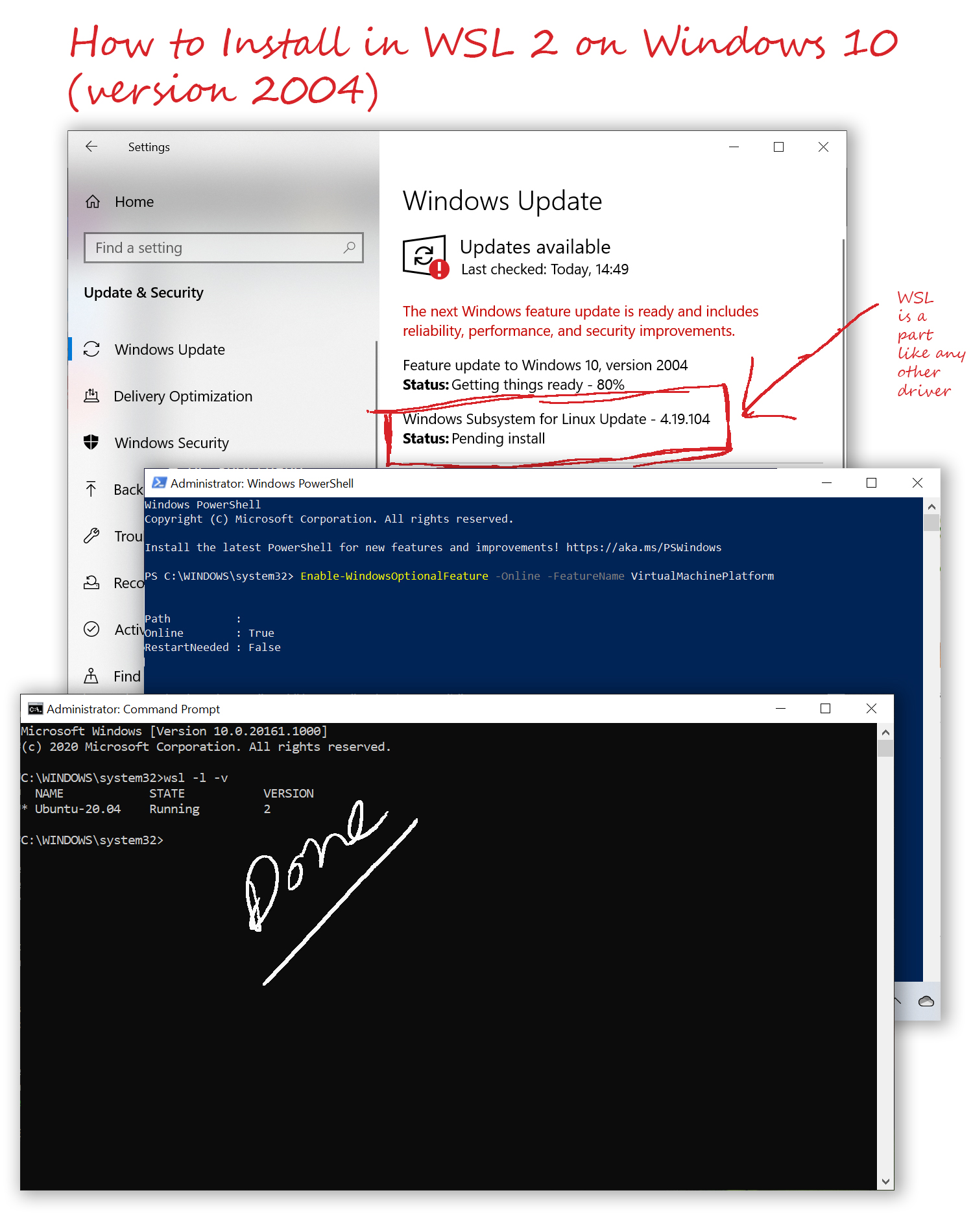 Test whether it is really WSL 2 by running the below command from Command prompt or Powershell :

You required more commands to set WSL 2 as default for a particular distro. Chris have an excellent detailed guide for the older versions.