Residents of old houses with 2 to 3ft thick limestone exterior walls and some load-bearing interior walls often face problem while deploying Wi-Fi to their houses. Most of these walls were insulated and it is super difficult for any radio-wave to penetrate. While these buildings are good for health while deploying solutions related to the Internet of Things invite a lot of problems. Height of most of these buildings are 12 feet and often newer RCC constructions are built as a modification. Thick and tall walls make the usage of home drills a joke.

What router to use in these cases and where to place the router? Routers such as Netgear R7000 claims to penetrate thicker concrete walls. In real life, I have not seen much difference with cheap routers such as TENDA AC1200. I would not suggest purchasing a costly router for an old building with 3 feet thick wall. Next technical offer is adding Wi-Fi repeater/extender. There are costly range extenders in bizarre shapes and prices which claim to be a magic bullet. However, TP-Link CPE610 could not help me in my 4000 square feet old house.

Next technical offer was the installation of Mesh WiFi. According to the advertisements, it works by using two or more mesh WiFi devices (nodes) to create a mesh WiFi network. However, I could not see much hope and skipped this option to save money. As a final and current solution, I deployed Access Points wired (ethernet wiring) back to the main router. This setup was not super easy or cheap but it solved my problem. 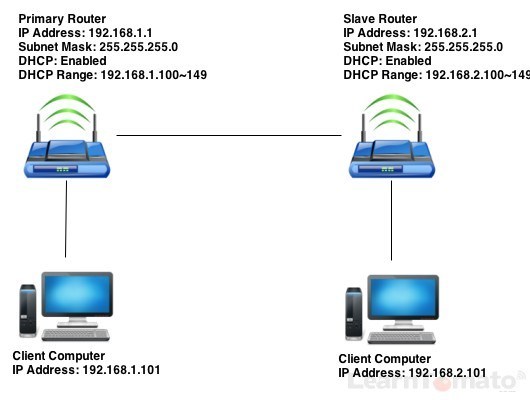 If you connect the WAN port of the second router to connect with the first router, then you are “Setting up Secondary Router via Ethernet Cable”, that is a slightly different thing. In this case, you have to enable DHCP on First Router and disable DCHP on the Second Router. This will allow the First Router to assign all of the IP addresses in your network.

LAN-to-LAN extends your existing network connection to include the second router and allows to share files between devices. LAN-to-WAN creates a second network within the main network, you can place restrictions on any device. The second one sounds superior. However, not all the ISP will allow sharing your connection at the same speed in this way!

Now, you have a lot of LAN ports to connect your devices via ethernet. The room which will have the second router will not face the Wi-Fi signal issue. You have to perform some tricks like placing the router closer to the adjacent room’s window to get signal in the second room. It doesn’t matter you connect three or more routers to the first router, but don’t forget to make sure of IP addresses of them. An extra router works itself as a backup router. Purchasing a lot of extenders with limited or no LAN port probably less helpful.

Articles Related to Wi-Fi for Old House With Thick Walls