The term pervasive computing or computer penetration denotes the all-pervasive networking of everyday life through the use of intelligent objects. Computer processors and sensors are constantly getting smaller and cheaper, wireless communication is already available almost everywhere in Western Europe. Precise personality profiles can be created by automated collection and evaluation (by KDD and data mining) of data.

The term pervasive computing is the industry-influenced view of the ubiquitous computing, whereby the computing presence is a prerequisite for computer penetration, but the computer penetration still has the condition of the connection of all computers. With some technology already available, attempts are made to penetrate business processes and general areas of life. The data obtained is used commercially, for example for e-commerce. Pervasive computing is already in use in this area.

Ubiquitous Computing is a concept in software engineering and computer science. It is understood as the integration of computing into the person’s environment, so that computers are not perceived as differentiated objects, appearing anywhere and at any time. It is the concept that determines for the first time that man should not adapt to the machine, but the machine does that. It is a paradigm that allows offering computing services through a network, which is usually the internet.

Unlike desktop computing, ubiquitous computing can occur when using any device, in any location, in any format. The user interacts with the embedded computer, which can exist in various forms, including laptops, tablets and terminals on common objects such as refrigerators, TVs or a set of glasses. The underlying technology supported by ubiquitous computing includes the Internet, middleware, operating systems, mobile code, sensors, microprocessors, user interfaces, networks, communication protocols, positioning and location, and new materials.

Pervasive computing has the potential to change society sustainably. However, there is no broad-based social debate. The development is also driven by the public security debate. However, some security experts do not see the growing control capabilities – surveillance – as a security gain. Pervasive computing advocates see new opportunities for users and new mass markets. Opponents criticize what they see as a hasty introduction by industry and politics. 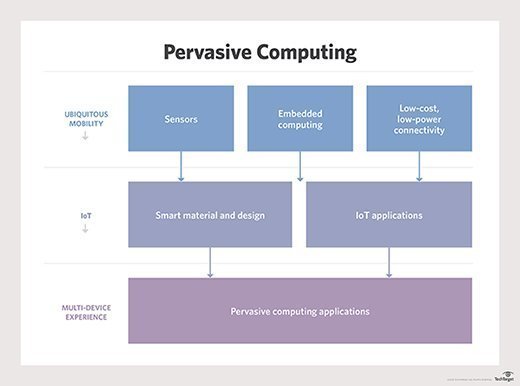 Pervasive computing has far-reaching consequences for society. Five areas of life or topics are particularly affected:

Tagged With what is pervasive computing

This Article Has Been Shared 998 Times!

Articles Related to What is Pervasive Computing?