Advertisement
You are here: Home » Windows 7 and Mac OS X: which one is better?
Advertisement 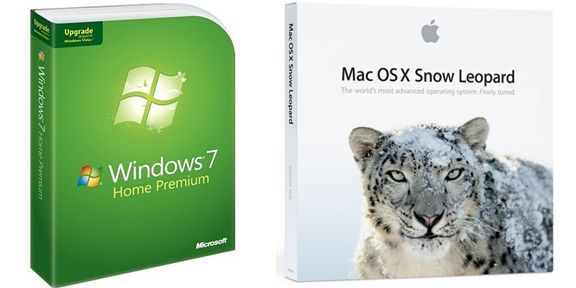 Microsoft and Apple compete with the new versions of their operating systems those launched two months apart. Thecustomizewindows presents an honest comparison after using both the operating system for more than one year.

With Windows 7, Microsoft tries to forget the badpatch of three years after the introduction of Windows Vista. For this, the world’s leading software company has not taken any chance to do any mistake: 3000 engineers worked on Windows 7, which was tested by 8 million people. “Windows 7 is Vista the same technology but more polished, thanks to three additional years that Microsoft engineers had to correct their mistakes,” said analyst Rob Enderle.

A disturbing fact that the Redmond giant hesitate to admit. “When Vista was released, Windows XP existed for over 5 years and was fully optimized for the machines at the moment. For Vista, our partners have had to adapt their software and devices to the new system architecture, which took time and slowed its adoption”said Philippe Perechodkin, director of the Windows division at Microsoft.

The failure of Vista was obvious: more than 60% of PC users, business and the general public,was still using Windows XP, cons just over 22% for his successor. For fans of netbook, this rate is close to 100% because Vista is too slow to run on these low-cost machines.

Compared to Apple, the contrast is quite violent. Over the eight years of the reign Windows XP, the rival Microsoft launched its own 7 versions of the operating system, Mac OS X, managing a smooth transition to Intel chips. Version 10.6, also known as Snow Leopard, Mac OS X was launched on August, 2009.

The last year was certainly the first since the launch of Windows XP and Mac OS X in 2001, the two firms compete with a new version of their systems. “Both companies are observed continuously and do not hesitate to adopt the popular features of the other. DirectCompute of Microsoft and OpenGL for graphics are similar, while Live Basics (free) builds on the iLife suite. But I do not see any excessive copying, says Rob Enderle, who regrets that contrary to the two platforms are not more similar to facilitate the transition from one to another. The opportunity to engage in a little price comparison.

Installation or Migration: No clear advantage

For a user of Windows XP, the transition to Windows 7 is an obstacle of course: mandatory backup of all data before the complete cleaning of the hard drive and a facility that can last several hours! In contrast, migration from Vista to Windows 7 is much faster and automated.

More surprisingly, the release of Snow Leopard will be remembered as the worst launch of a new Apple Mac OS X: several bugs and software incompatibilities , some of which remain unresolved, have indeed damaged his exit. “This is all the more inexcusable that Apple should test their software on its own machines, or dozens of models at the most, while Windows 7 must work with thousands of PCs, the most diverse configurations. In trying to pole styling Microsoft, Apple has botched its software. An output which reminds me of Windows Vista, “quipped analyst Rob Enderle.

Even if Mac OS and Windows avail themselves of menus, windows and icons to navigate the system or launch applications, it is difficult to confuse. Mac fans continue to plebiscite the greater ease of use while Windows 7 is distinguished by its ability to manage multi-touch touchscreens, like the one that equips the HP TouchSmart PC. This function is, however, already present in the mobile version of Apple’s system which equips the iPhone / iPod touch since its launch three years ago and a half.

Even if Windows 7 takes less time to start and shut down its predecessor, it depends on the power of your PC and optimize hardware / software made by the manufacturer. “Windows 7 takes several more minutes before being ready to use and navigate the Internet,” said Nathan Brookwood, an analyst at Insight64. However, Windows 7 shines in its management of Sleep “, which gives life to a PC in just a few seconds, as was already the Mac OS.

Security holes and viruses are one of the plagues of Windows attracting virus writers, and are at the origin of “crashes” or “blue screen of death” repeatedly blocking PC. Therefore, with Windows 7, Microsoft offers a free download of its Security Essentials security suite. “With this suite incomplete, Microsoft requires users to create their own suite, while there are already products for this really comprehensive,” said Joris Evers of McAfee. Unfortunately, the installation of these security suites tend to slow down a PC. For its part, Apple highlights the security layer integrated Mac OS, which explains in part the rarity of attacks … also it is related to the low market share of the system.

As usual, Microsoft does not facilitate the purchase of Windows, which this time comes in 6 different versions, and whose prices varies greatly. Apple is much simpler: Snow Leopard costs less. There is no OEM blue for Apple. According to Microsoft “Windows 7 is a new version of our operating system, while Apple makes you pay for a simple update. For us these updates are free via internet”.

Articles Related to Windows 7 and Mac OS X: which one is better?