Solid State Drive is made with the help of solid state physics. Instead of moving mechanical parts such as spinning magnetic disks, it has no moving parts. To understand the basics of traditional Hard Disk Drive, please read our previous article on Hard Disk Drive.

Overview, Structure and Function of a  solid state drive 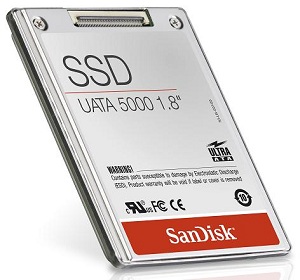 Two types of memory chips are used in Solid State Drive; Flash -based and SDRAM based. The combination with DDR SDRAM provides more power to a Solid State Drive. Solid State Drive consists of flash and controller chips, which are arranged on a circuit board. Size has no influence on the speed, but the number of chips. Many Solid State Drive models have plastic or metal (partially) covered to protect the components as well – to give solidity. The highlights for the advantage of light weight Solid State Drive is  intransigence of the impact resistance of the metal casing back on.

The elimination of the sensitive and motor bearing mechanics of conventional drives with rotating disks has increased the impact resistance of Solid State Drive. The major disadvantage is price factor which we have said about at the beginning. At the time of writing this article, a Solid State Drive when compared with a traditional hard disk drive of same capacity is still about 14 times higher priced.

This Article Has Been Shared 595 Times!