Advertisement
You are here: Home » Plasma Display : How a Plasma Screen Works
Advertisement

Plasma Display is a type of display that is used mainly for larger Screen. LCD Screens are usually not manufactured as so large display. As usually, like any display technology, Plasma Display has its own advantages and disadvantages. Previously we have published post on Difference between LCD and Plasma display, which might make your basic idea clear.

Plasma is ionized gas, in addition to neutral particles and free ions, it consists of excited atoms and electrons. In the Plasma Display the screen is made ??in a way so that emission of UV radiation can be done through a low-pressure plasma. The functioning of Plasma Display practically resembles basics of a fluorescent lamp.
In Plasma Display, between two glass plates there are very small chambers. Three chambers results the color screen an image point – a so called pixels.
Each of the three chambers is of the three primary colors red, green and blue. Everyone knows these three colors can create all visible colors by proportonate mixing.
For forming an image on Plasma Display, each chamber is individually fired, the gas is ionized for a short time, then it becomes a plasma. The basic colors in the chambers of Plasma Display are controlled by phosphors, as soon as the ultraviolet radiation is emitted by the plasma, the phosphors convert the UV radiation into visible light with the phosphor according to each different color. 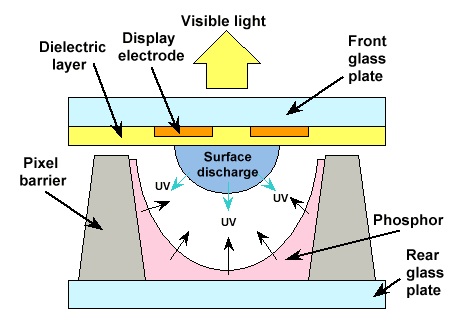 Advantages and Disadvantages of Plasma Display

But, as the technology is related to infrared emissions, it has limitations and hazards, where as LCD is completely inert.

This Article Has Been Shared 160 Times!

Articles Related to Plasma Display : How a Plasma Screen Works