Java virtual machine English is a fictional computer device simulated by specific software for each platform that executes programs compiled into Java bytecode. The device is simulated by a specific software for each platform (machines or OS) which enables applications of Java to produce the same results regardless of the platform as it is provided with the Java virtual machine proper.

Java Virtual Machine can run other languages than Java language, as long as a compiler transforms the expressions of that other language in a series of binary bytes in a format of a java class. 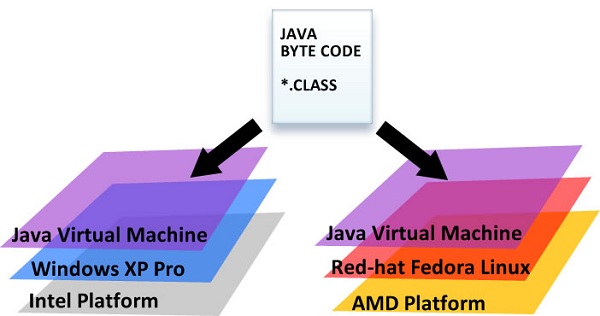 Specification from Sun describes the functions and properties that must comply with all Java virtual machines. Moreover, most of these machines have a garbage collector, the concept is mentioned in the specification, but not formally mandatory or a compiler on the fly.

In November 11, 2006, Sun Microsystems released the source code of their HotSpot Java Virtual Machine and its compiler licensed under GNU GPL.

There are more Java Virtual Machine softwares, most are free of cost and is Open Source.