Advertisement
You are here: Home » Cloud Computing Brought the Success of Tablet Model of Computing
Advertisement

Cloud Computing Brought the Success of Tablet Model of Computing because of high speed load balanced Internet connection and various Software as a Service. Although today the word Tablet is almost synonymous with the iPad or Android, before the new Apple devices there have been some attempts to market this device. In 2002 the tablet had Windows XP, it was known as the Microsoft Tablet PC, but the result was a commercial flop, despite from the processor architecture was mobile version of desktop processors, at least for some models; but the ARM processor based frankly bigger version of smartphone won the game. Today, few reads our guide – Build your own Windows 7 powered Tablet PC in under $500. No one reads because at $500 you can buy many good portable computing device today and  Cloud Computing has brought the success of Tablet Model of Computing through various ways of implementation, some quite obvious, some are hidden behind.

Cloud Computing Brought the Success of Tablet Model of Computing : Evaluation of the Hypothesis

Cloud Computing Brought the Success of Tablet Model of Computing is becoming like an hypothesis from several points, mostly it actually gives the way to analyze how Cloud Computing should progress ahead.

The first tablet have had no luck as they were heavy, there were problems getting the software to run on their hardware normally designed for the desktop and most importantly, within them there were too few available applications. When Apple reshaped the concept of tablet through iPad designing and launched it on the market, they already has added a new App Store, ready two years before the release. This has allowed the customers to have as a reference point for the device, an ecosystem of apps, games, maps, already designed, tested, implemented and adopted by the other customers. Second is Apple’s strategy of forcing to use certain network only. The technical reason was, those ISPs had the service delivery through quite advanced load balanced servers connected within them by load balanced Internet. VPN was forced. This made the Internet connection to have Mbps level, not of Kbps any more.

If you think carefully, actually Nokia Symbian S60 smartphones were the actual ancestor of this wide mobile computing idea. The devices were stable, the operating system was (at that time) highly customizable, custom softwares were available. There was problem with Symbian itself plus the connection speed, no Cloud based Apps hindered and killed Nokia. Still today many users dreams of Android on Nokia. Nokia being the one of the leader of communication destroyed themselves just because of not understanding this simple hypothesis – Cloud Computing Brought the Success of Tablet Model of Computing. 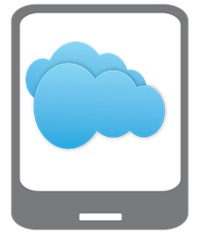 You can not force anyone to suck a bitter tablet, this model of treatment does not work. Either the patient will spit it out or body will refuse it as vomit. You have to deliver in a way that is widely, in free mind is acceptable.  The key factor that has enabled the tablet computing to definitively overcome its limitations and learn about global adoption is cloud computing. And ‘this technology to is the glue cum sugar coating. Although the tablet is an ideal platform for many functions, their form factor severely limits the computing power and the total memory available to it. It is this limitation makes the tablet and the app in them the presence of cloud computing so important.

Because the most important data can be stored in the cloud, nothing happens disastrous if you forget your device somewhere, also being the cloud is compatible with any platform, you can access from any access point, at any time, from any device, making the same tablet just a convenient window to access the cloud.

Now about Applications on the Cloud as Software as a Service or even Infrastructure as a Service. With an iPad or Android Tablet, you can actually deploy a cloud server on Rackspace if you need more computing power of a full computer and use it as VNC remote desktop – like we guided in Ubuntu 12.04 LTS Rackspace Cloud Server as VNC Remote Desktop. Cost is few cents per hour.

This Article Has Been Shared 499 Times!