Console2 Customization and UNIX Functions needs a bit good understanding of how the command line tool of a Operating System works. Here is a brief article. Just few week ago we published Colored Text with Syntax Highlighting Translucent Console for Windows guide and related many guides. One visitor left a question cum wrong message – if we can use all the functions of UNIX on Windows, then why we need to use Linux like Ubuntu or Mac OS X. First is Console2 Customization is easy but it is not the look we are thinking of. People long ago added some features as Free Softwares without any wish of money so that those who are using Windows and there is no way of return, can use the UNIX commands. As now the scenario has been changed, Ubuntu 12.04 LTS is far superior than Windows 7 or Windows 8, Mac OS X is rock solid and looks great, no high end user who interacts with servers many hours per day, do not use Windows. This is the reason the GNUWin32 like projects are not that active – they are more involved with making Linux more beautiful to look and easy to use. On the context of Console2 Customization and UNIX Functions, it is important to understand, most Operating System has a command line tool, that is default.

This Console2 Customization looks great, but : 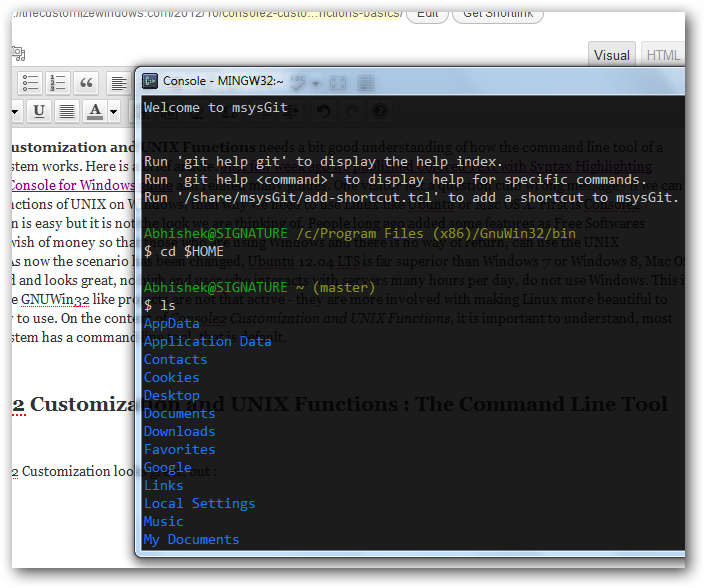 that is only for making Console2 Customization to tunnel through the Git Bash. This is not running through your Windows Command Prompt, which is the default Command Line Tool for Windows OS. No one can change it in hard coded way, if you need to boot from DVD installation media, that ugly Windows Command Prompt will appear – we are simulating a better look with some extra functions. This will be obvious when I will right now lift off the forced running through Git Bash and all Console2 Customization will look dull (you can see in the screen shot these texts to give you the impression of real time work) : 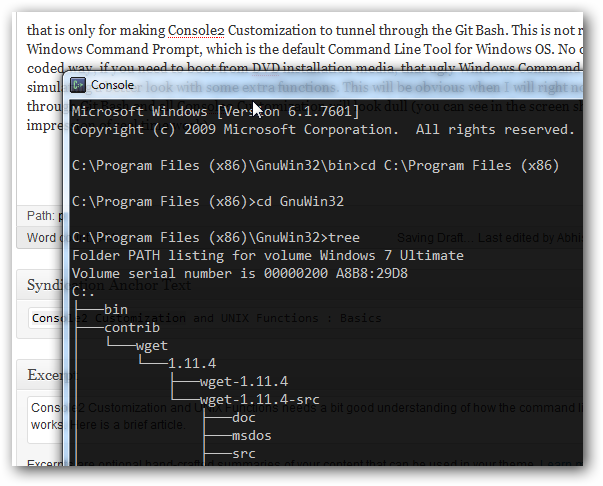 Neither you can make your Windows PC a Mac OS X or Ubuntu or the reverse situations. There are many ways to load a third party Command Line Tool instead of Git Bash and Windows CMD.

The basic reason is difference in Kernel. You can actually use many things of Mac OS X on Ubuntu and sometimes the reverse. As both fully support POSIX directly, but Windows run POSIX with compromise.

This Article Has Been Shared 285 Times!