Tools for Using Dropbox Cloud will help you for using Dropbox Cloud Storage easily for Web Hosting serving HTML webpages with Javascript, CSS or Bootstrap LESS. Dropbox is a Freemium Cloud Storage and basically HTML pages should not get rendered on HTTP GET request on browser due to absence of POST header. But for some reasons, Dropbox actually makes the POST header for index.html webpage inside any folder which in turn inside the public folder. We in case of Rackspace Cloud Files, have shown you how to modify the header to render it as HTML webpage. Although, Cloud Files should not be compared with dropbox, it is Jungle Disk which can be compared with Dropbox.  Tools for Using Dropbox Cloud will basically make the process easy, that is what it is. In other words, our previous tutorials for creating various things on Dropbox can be made easier with the usage of  these Tools for Using Dropbox Cloud.

Tools for Using Dropbox Cloud : Previous Guides Which You Can Deploy

Twitter Bootstrap Design Website on Free Dropbox Cloud Guide is the perfect example of creating a good looking site on Dropbox. Other example can be Cloud Files Hosted Music Player of Your Own. It was actually for Rackspace Cloud Files, but Dropbox can be used in the same way. We have other Tutorials on Cloud Files, which should essentially work as well.

Paid plans are solid rip offs for sure, free one / basic actually quite good. It actually acts like a CNAME in case you have a server and domain. They actually uses the trick like wordpress.com multisite for domain mapping. So as a user you can get a domain like :

So, your bigger url became shorter now. Your files will be inside Apps folder (not Public folder) : 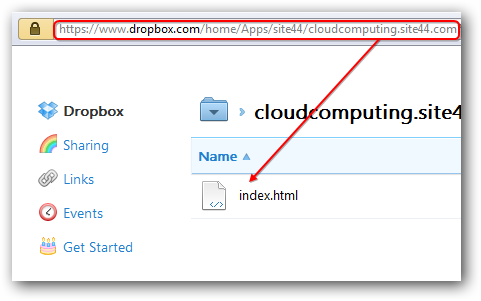 Second tool is Droboxifier. You can get it from here :

We need to upload the custom Bootsrap designed HTML website or that Cloud Music Player like small app content files and folders. This is what this app will do. It is for peoples who still uses Windows. Mac and Ubuntu / Linux already have such Apps since Dropbox has been popular.

This Article Has Been Shared 794 Times!