Advertisement
You are here: Home » Humans.txt : Something Unlike Robots.txt
Advertisement

Humans.txt unlike Robots.txt is a text file kept at root of the server to give credit the people behind a website and has only humane value. There is syntax for Humans.txt just like Robots.txt also has. Let us dig about this relatively less known Humans.txt file.

What is Robots.txt file

Configure the robots.txt in WordPress properly for easy crawling

All about Mediapartners Google and AdsBot

The basic reason it is named as Robots.txt is – it uses the logics of Multi Agent System (MAS). What is usually you call Google’s Algorithm – those parts of these system. As MAS is related to robots, the file is named accordingly.

Humans.txt, on the other hand, is to give credit to the humans. You will find details about Humans.txt here :

There is WordPress Plugin to create Humans.txt :

Actually Google Authorship meta tag is a variant of Humans.txt. That is the reason why on that detailed website, it has been mentioned to add the meta tag towards your own website’s Humans.txt file. It is matter of fact, many bigger websites has Humans.txt file. Google ventures has a humans.txt with ASCII art : 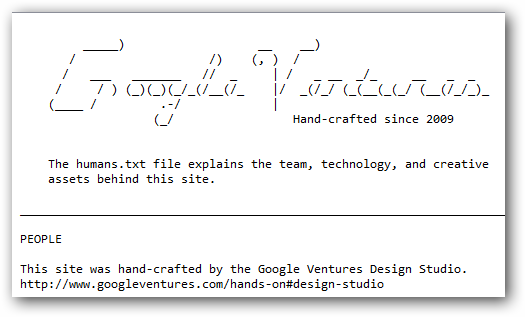 Barry Schwartz has not that much importance to Human.txt :

But the article is of around 1.5 years old – just around Google’s limited edition of Google Plus release. After that, many things has been changed, Google practically asks to point towards the Google Plus profile with proper rel tag. That actually gives enough data to Google. Adding a Humans.txt is fully optional and you can add if you like, nothing less or more.

This Article Has Been Shared 483 Times!

Articles Related to Humans.txt : Something Unlike Robots.txt