Network Interface Controller is a peripheral device that allows connected devices to communicate with each other and also to share resources between two or more computers (hard drives, CD-ROM, printers etc). Network cards are also called NIC (network interface card). There are different types of adapters depending on the type of wiring or architecture that is used in the network (coaxial, thick coaxial etc.), but currently the most common type is the Ethernet interface or connector using a RJ-45.

Although the term Network Interface Controller is usually associated with one expansion card inserted into a slot inside a computer or printer, it is often used to embedded devices on the motherboard of the computer, such as interfaces present on consoles Xbox or laptops. Network Interface Controller is also used for the same purpose in expansions of anything reminiscent of the typical chips like network interface for the PCMCIA  or cards with connector and form factors like CompactFlash and Secure Digital SIO used in PDAs . 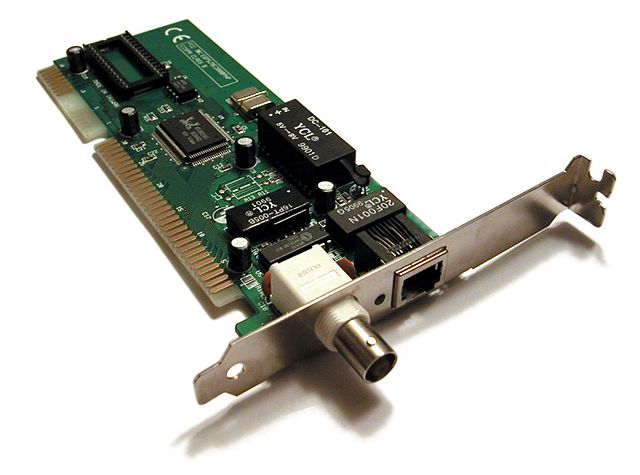 Every Network Interface Controller has a unique identification number of 48 bits in hexadecimal called MAC address (not to be confused with Apple Macintosh). These unique hardware addresses are administered by the Institute of Electronic and Electrical Engineers ( IEEE ). The first three octets of the MAC number are known as OUI and identifies specific providers and are appointed by the IEEE .

Network Interface Controller  is also called the integrated circuit network card that serve as interface of Ethernet between the physical environment (eg a coaxial cable ) and equipment (such as a personal computer or a printer ). It is an integrated circuit used in computers or peripherals such as network cards, network printers, to connect two or more devices together through some means, wireless, cable UTP, coaxial cable, optical fiber , etc.

Most cards bring an empty labeled BOOT ROM to include an optional ROM which allows the computer to boot from a network server with an image of a bootable media, allowing use computers without disk hard.

This Article Has Been Shared 317 Times!