Real-time Transport Protocol is operated over UDP. Real-time Transport Protocol or RTP can be used for unicast connections as well as multicast communications in the Internet. This Real Time Control Protocol serves the negotiation of and is compliant with quality-of-service parameters (QoS). It is used in many fields, including in the H.323 IP telephony standard, it is used to transmit the audio and video streams of conversation. The function of RTP is mainly in the transmission of real-time-sensitive data streams, while the Real-Time Streaming Protocol (RTSP) is used to manage and control the data transfer. The Datagram Congestion Control Protocol (DCCP) is a recent approach to allow for media streams to RTP / UDP-based congestion control. 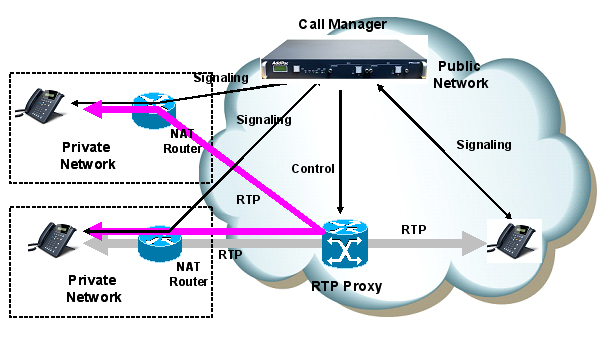 Synchronization Source : The data source is called Synchronization source and is characterized by an identifier (32 bits) in the header.
Mixer : Mixer as switching centers are referred to points, which receive the RTP packets from one or more sources and forward. them. The term mixer is explained by the fact that the mix switches the packets (and time sync) or format conversions.
Translator : Such exchanges, which forward the packets without modification, for example, to transport them through the firewall are called Translator.
Receiver : The receiver of the RTP packets sorted on the basis of the sequence numbers and provides it to the respective application.
RTP packet : An RTP packet consists of a header with version and sequence number, data format, sender ID and time stamp, and the payload.