Android OS on PC or Mac can be tested on VirtualBox or VMWare Fusion using an ISO image of Android OS like Android 4.0 or a ready made virtual appliance. Other than Virtualization, if your computer’s processor does not support virtualization, you can use older version of Android OS as live CD.

There are three or four iso of Android 4.0 currently available. Android-x86.org and Kirsle.net both has developed working iso of Android. You first need to download the iso :

VirtualBox itself has no difference in gross GUI in Windows or Mac. We are giving example to run Android OS in this guide on a Mac.

So open VirtualBox and create a VM with a settings of Linux 2.6 (3) and Linux (2), Give any name (1). The numbers corresponds to the screen shot :

In next screen allocate 1 GB or more RAM and keep all settings thereafter as default selected settings. After creation, go to the Settings and add the Android iso as CD / DVD device : 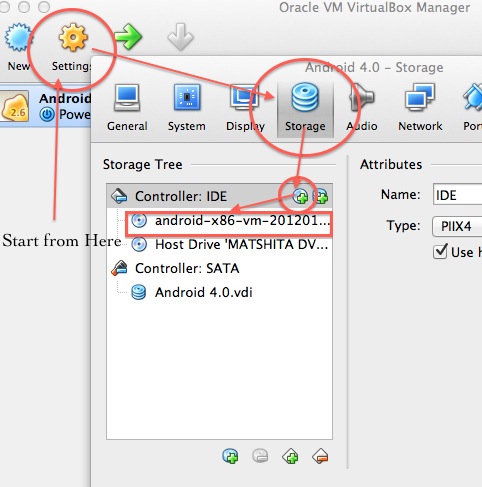 Click OK to save the settings and click that Green arrow saying Start in VirtualBox main Window. The VM will start from iso :

There is basically no need to do anything, it will boot nicely to Android 4.0 :

Arrow Keys, Tab Key, Enter, Esc etc. all will work. In fact you can browse the Internet through Android browser :

It is looking funny, but basically it is how our virtual servers runs !
If you configure with some special apps and distribute as image, then it will be a full virtual appliance. As it is not normally needed, the iso is better to use; you can configure as you need.

This Article Has Been Shared 456 Times!