VMware ESX is actually a too bigger solution for Virtualization and not suitable to run on a User centric computer. This is where VMWare Fusion is important. VMware Fusion utilizes current Mac’s Intel VT feature present in the microarchitecture platform. Much of the underlying technology in VMware Fusion is inherited from other VMware products; such as VMware Workstation, allowing Fusion to offer features such as 64-bit mode and SMP support.

Actually VMWare Fusion can not compared with other products or softwares. It has many other features like the Unity view, which creates a seamless desktop environment between Microsoft Windows and Mac OS X applications. The program manages the wireless network mode. DirectX 9.0 is supported through dynamic recompilation for OpenGL instructions. VMware Fusion supports gesture. You can see the features on their official website : 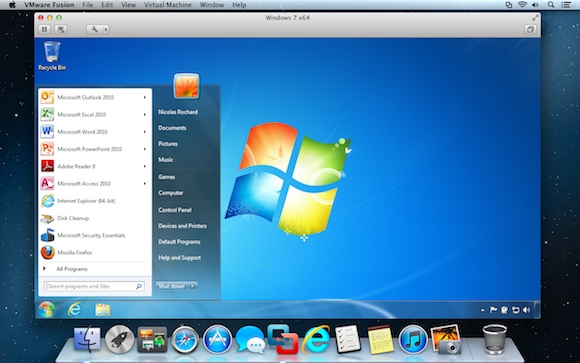 VMware Fusion versus VirtualBox for Mac

VirtualBox supports both Intel’s VT-x and AMD’s AMD-V hardware-virtualization. VirtualBox is a Free Software. VirtualBox is an x86 virtualization software package. Prior to version 4, there were two different packages of the VirtualBox software. The full package was offered free under the PUEL, with licenses for other commercial deployment purchasable from Oracle. A second package called the VirtualBox Open Source Edition (OSE) was released under GPLv2. This removed the same proprietary components not available under GPLv2. On a newer Mac, it actually can do a good work. Actually it was paid software, at least one version.

There is a video guide previously published by us :

The choice basically depends on usage pattern. For those who need the full hardware level support like Playing Games on Windows OS, VMware Fusion is possibly a better solution. As Games are having separate versions optimized for Mac (due to Retina Display and other points), possibly Games is becoming a less need though. It is basically better to avoid Windows OS by all means. However, for other OS too; VMware Fusion is possibly for a type of users who will use or need a tight integration with the hardware. VirtualBox is a good solution for doing command line works like using Ubuntu on Mac for installing WordPress for Free of cost. But, things should be clear – Parallels Desktop 8 for Mac is worser than VMware Fusion and Boot Camp is the best way to run Windows on Mac on everyday every hour based usage. There is no meaning of whipping the processor when you actually need to buy a separate Windows License.

This Article Has Been Shared 457 Times!

Articles Related to VMWare Fusion or VirtualBox for Mac ?