Architecture of OS X has a Hybrid kernel historically combining updated Mach kernel with subsystems from BSD and has a distinct client and server editions. Kernel is very important point to understand any operating system’s stability and definitely it is relevant for understanding the Architecture of OS X. You can read our previous article on Kernel of Operating System and understand the diagram included in that article.

Architecture of OS X and Latest Changes in OS X

It is a basic point to know that, OS X is the official nomenclature of Apple Inc.’s Mac OS line of operating systems. Under the previous name Mac OS X, the operating system was officially designated as simply version 10 of the Mac OS, that X represented roman numeral. The version 9 had a completely different codebase and will not be discussed in this article on Architecture of OS X.

There are various reasons why OS X 10.8.2 differs from the previous versions. The difference is reflected by few points on the user lever of the operating system, like :

At the time of writing, a version of OS X, beta version of 10.8.3 is actually available to the developers :

Architecture of OS X : Inside the box

The most updated and reference website for Mac OS X and OS X is OSXBook :

Definitely all the developer side information are available officially on Mac Developer Library : 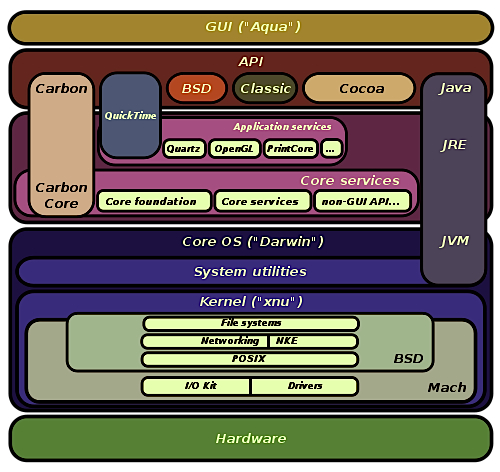 The above diagram briefs up the architecture of OS X, which is technically not comparable with pure UNIX, neither can be labeled as Unix like. The needed source codes, except few parts are basically open but coded for Apple based system at kernel level.