Dock of Mac OS X is an icon of Mac itself. Dock derived from OS X’s predecessor NeXTSTEP Operating System. Dock of OS X has several discovered tweaks. Another important feature we wrote about OS X is the Dashboard of Mac OS X. As we said before, the Dock is among the feature of Mac OS X those has been tried by Windows developers to re-create similar looking application. XWidget is an example of such prototype clone for Windows OS, Rocket Dock is another example. In this article too, on Dock of Mac OS X, we are writing OS X and Mac OS X alternatively. The reason is, Mac OS X is OS X now, but not all the users are aware of this kind-of rename.

Dock of Mac OS X is under US patent for the design of the Dock which was granted in October 2008. Mac Applications can be added and removed to the Dock by drag-and-drop, but not the Finder application. Dock of Mac OS X is a part of the core services in OS X, it is Dock.app and is located at /System/Library/CoreServices/

In NeXTSTEP Operating System, Dock was basically an application launcher to keep the icons for frequently used programs and some fixed programs. It was vertical like now it is for Ubuntu. Docklings was present in Dock up to OS X 10.4; after that release, from OS X Leopard, docklings has been replaced by Stacks with three kind of views with spring like effect to show the content – List, Grid and Fan plus anything among these with Automatic. Microsoft partially could copy the visual effect of List and Fan in Windows 7, giving the name SuperBar.

There are various visual effects those can be seen on Dock in OS X 10.8.x :

Magnification effect is not default, it needs to be activated from System Preferences > Dock. By using the [option] + [command] + D ; the user can hide and show the Dock. Thus, when hidden, clicking the (+) Green button of the Traffic Light of any opened Application Window utilizes the full resolution of the display. Clicking any item on the right side of Separator while holding [Shift] key creates a slow motion animation effect to show in Grid. There are lot of such shortcuts : 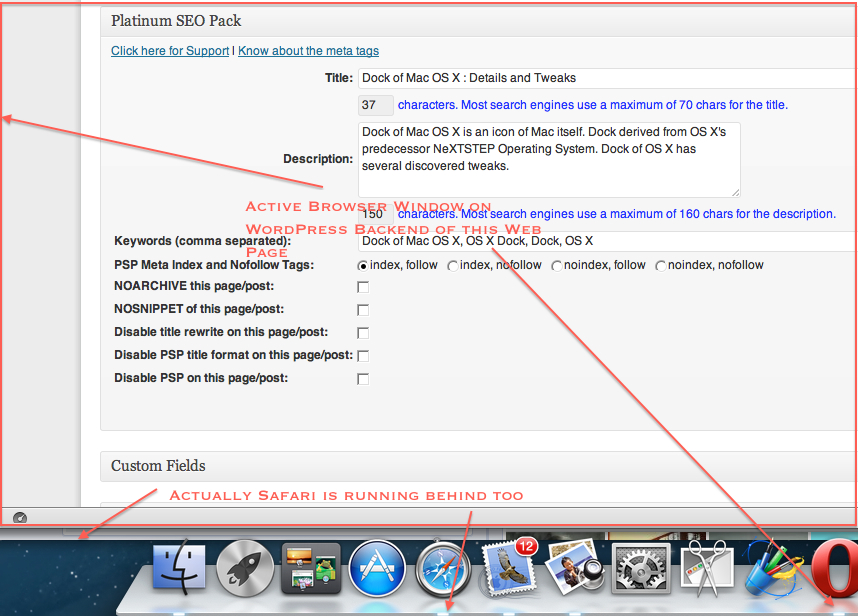 All are commands intended to be used by the users who are aware, how to use the Command Line Interface (CLI) with Terminal or iTerm2.

It is to be done after applying any new settings of below.

Making the command to NO from YES will revert back to 3D. The 2D looks pathetic but interesting.

Reversing is the same method.

See song’s information whenever iTunes is playing with a small popup will appear above the iTunes icon in the Dock :

Reversing is by using FALSE instead of True (for all of the below unless it it is YES then it will be NO). Yes, this is the effect Windows 7 copied.

Reversing is by using NO.

Reversing is by using FALSE.

How many effects are in System Preferences > Dock ? Two, right. All use the Genie effect. There is a suck effect too :

To revert back, go to System Preferences > Dock and change the effect to Scale then Genie. Its a hidden feature and the funny effect really sucks. It appears to joke the default Microsoft Windows minimizing effect. Microsoft Windows is really a solid joke. The core is copied from OpenVMS, the GUI up to Windows 7 copied from Mac. So many copying possibly made the unknown vulnerable points to Virus, Malwares. It is better to use any Linux if you can not afford a Mac. The effects on Linux are also great and not copied.

This Article Has Been Shared 412 Times!