Advertisement
You are here: Home » LCD Monitor as Television : How To Guide
Advertisement

LCD Monitor as Television has several advantages over pure television apart from being at least 25% cheaper with all the needed things. LCD television is always costly because it is pure consumer grade product, whatever the price is. As now most of the consumer grade product manufacturers are in real hard game of lowering the price competition for their computer related products (including Samsung, LG), their major profit is from the consumer segment. It is quite obvious fact that, LCD Television is nothing but a LCD Monitor of lesser resolution (it is not the unit measured in pixels) LCD Monitor (as none watches a television from 8 inches away from the screen, unlike a LCD Monitor) with some extra things. We can add the extra things from outside.

Using a LCD Monitor as Television is now not that uncommon. Most medium sized PC parts, accessories selling shops actually has the required knowledge to do it for you. A bit knowledge on Audio Video Connectors is needed so as about Set Top Box.

The major advantages, apart from cost saving is the clearly known technical details of the display unit (LCD Monitor when sold in Television form, the manufacturers append various loose terminologies), easy to replace the defective part etc. We are taking that you have an external Audio system. Most of us actually dump with various kind of Audio systems by virtue of invariably of lower cost and troublesome assembled Windows PCs. I have four such 2.1 audio of various sizes accumulated over 12 years or so.

That article on Set Top Box is very important. They usually comes with DVI or HDMI output. Audio system with RCA audio cables will work out of the box. But don not worry, there are RCA to 3.5 mm Audio conversion cable is also available. Any Audio system will also work. If you picked a cable box with an HDMI output you will need an HDMI to DVI Cable (If your monitor has HDMI input you don’t need that, but most do not).

Usually the widescreen LCD Monitors avoids the scary High Definition Content Protection on screen notice. Nowadays every needed things for this kind of setup are available as package in Ebay like websites : 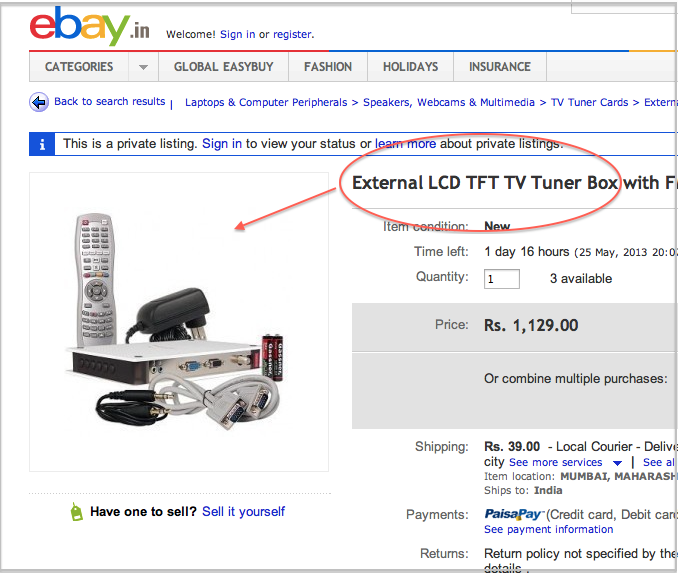 Basically a TV Tuner card is needed. This is a kind of needed specs :

Audio output to Sound Enclosure or sound card Line in

Articles Related to LCD Monitor as Television : How To Guide