Session Initiation Protocol or SIP, however is much better suited for IP networks. The structure of SIP allows to easily add new extensions without that all involved devices. Also, it is more general – While H.323 only intended for telephony, with SIP sessions of any kind can be managed. The main application is found in the audio and video transmission, some online games use to manage the transmission. An internet phone call to lead to you need more than just more, because SIP negotiate the communication modalities – the actual data for the communication need of others, for appropriate protocols to be replaced. For this purpose SIP is widely used.

The separation of both session and media streaming can be encrypted independently. You can use SIP over the TLS protocol, also known as SIPS and encrypt the streaming (voice data). Any combination thereof is possible. Purpose of a secure encryption has importance in data streams (i.e. meeting and media) which must be encrypted. The symmetric keys are exchanged via the streaming media SDP (i.e. SIP) and would thus may vulnerable over an unencrypted SIP. The symmetric keys of TLS are exchanged at the beginning of the session.

User Agent : The user agent is an interface to the user, showing the contents and taking orders. Even a SIP phone is a SIP user agent that provides the traditional call functions of a telephone, such as Dial, Answer, Reject and holding.

Proxy : A proxy server is a communication interface in a network. It works as an agent (routing) which accepts requests on the one side, and then connects to another side of his own address. Its task is to ensure that requests are sent specifically to the user. Proxies are also necessary for the enforcement of the hierarchy. 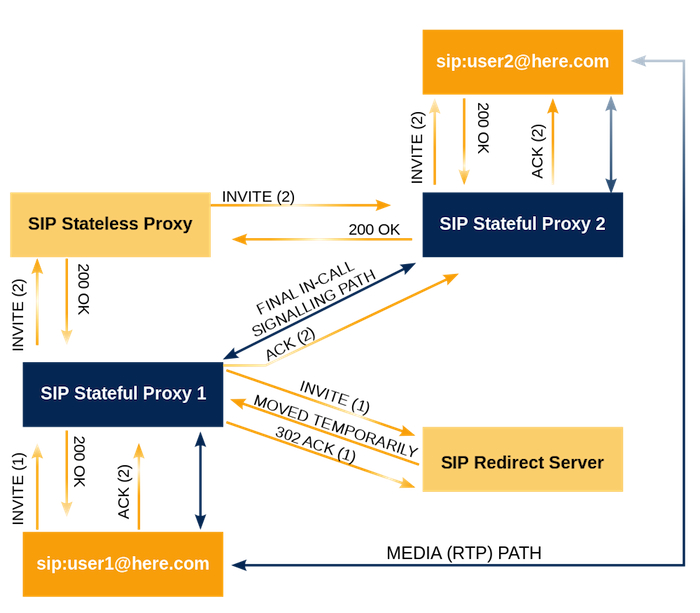 Registrar server : The registrar server acts as a central point in the system architecture of SIP. It will take over the registration of requests for the domain it handles. It can edit one or more IP addresses to a specific SIP URI, which are transmitted by the SIP protocol.

Redirection Server/Redirect Server : The redirection server relieves the proxy server. It passes the routing information directly to the user agent client. It generates the redirects the incoming requests to an alternate set of URI. The redirect server allows SIP session invitations to external domains to communicate.

Session Border Controller : A Session Border Controller is a network component for safe coupling of computer networks with different security requirements. It serves as a medium between nodes and SIP user agent server for different types of features, including support for Network Address Translation (NAT) Gateway A gateway can be a SIP network to other networks, such as for example, connect to the public telephone network that uses different protocols and technologies or can act as an interface.