Network protocol is a communication protocol for exchanging data between computers or processes, in a computer network computers are connected to each other. The arrangement consists of a set of rules and formats (syntax) that the communication behavior to determine the communicating entities in the computer (semantics).

The exchange of messages often requires a combination of different protocols, for different tasks (e.g. Internet protocol suite ). To master the complexity related to individual protocols the layers organized. Within such an architecture, each protocol belongs to a particular layer and is responsible for the execution of specific tasks (such as checking the data for completeness – layer 2). Higher layer protocols use the services of protocols deeper layers (layer 3 leaves, for example, that the data arrived). Along the way structured protocols form a protocol stack – based on the ISO-OSI reference model. Messages of a particular layer are also called protocol data units.

The typical structure of a Network Protocol 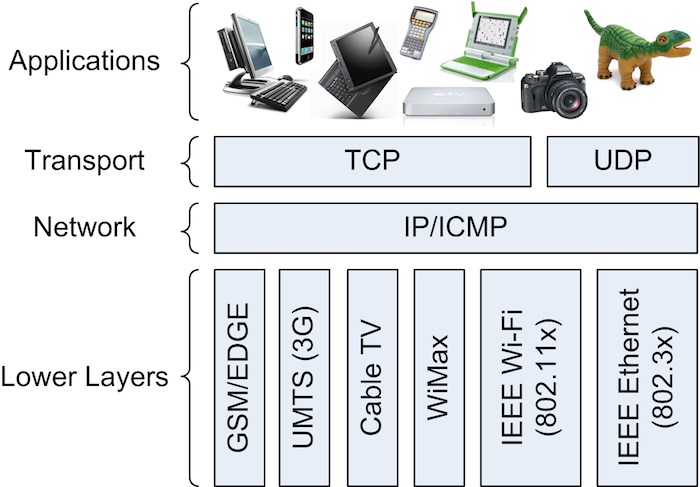 The structure described in any one of a protocol data packet includes the important information about data exchange package, such as:

This information is provided as a header to the payload data or attached as a preview. Moreover, in some protocols; fixed packet sequences for the connection establishment and release are described. These actions cause further traffic on the data lines – the so-called overhead. This overhead is undesirable because it burdens the capacity, but due to the more important tasks, making the logs, usually it is used. With User Datagram Protocol (UDP), in the transport layer a minimal overhead is available that does not ensure end-to-end control of the transmission. In contrast, in the Transmission Control Protocol (TCP), the checksum for the test to verify the data packet is complete. If the checksum does not meet expectations of the test algorithm, the data packet is discarded and requested again at the sending site.

The number of parties involved in the communication part; if there is a transmission with only a receiver, it is called unicast, for the transfer to several nodes, it is known as multicast . If the package is sent at all, it is a broadcast.

Communication takes place only in one direction, one speaks of simplex, the data flows alternately in both directions, from half-duplex or simultaneously in both directions, from full duplex. Status of communication participants are equal among themselves, it is called peer-to-peer or symmetric, otherwise it is asymmetric communication. The most widely used model is the asymmetric client-server model in which a service provider (the server ) requests processing from different clients (in which always the client is initiating the communication, that is a channel opening).

Use of Network protocols

The most famous use of protocols takes place around the internet, for loading of websites – HTTP or HTTPS  is used; for sending emails SMTP is used, for uploading and downloading files FTP , HTTP or HTTPS is/are used. You can search with particular network protocol name within this website for more information.

Articles Related to What is Network Protocol?