In any Operating System with this kind of Two Step Authentication, the basic is API or Application programming interface (this link is to detailed one, you can read the easy API Basics in Plain English version if you need not to go in to deeper understanding). This is basically the thing we discussed on Permissions and Identities in the Cloud. If we can not regulate it, a hacker can actually send email and from Mail it will go to Twitter. But, does it ever happens ? Never.

Another example of such Operating System based App and Two Step Verification process is Windows Movie Maker Video to YouTube with 2 Step Verification. OS X needs nothing to do. Automatically an App gets the verification from Vendor level. Technically it is dependent on Cococa Restful Client.

OS X and Mac is not for Rich People’s wife – it is for power user, it is UNIX. Open market and Credit Card – its nothing but a show bussiness that my husband earns more – that is basically not what is technology. Yes, you can actually test this Twitter thing with Cloud Based App RESTful API Testing with CocoaRestClient. That is tougher part, no need to know.

OS X Notification Center and Twitter Two Step Authentication will never fail, it will nicely work, the evoking factors can make fail. One of such evoking factor is when update is available and you have not updated your OS X but restarted or shut down it. It will simply deny to login. This happens to ensure security.

Fix are numerous in number if you basic idea about OS X or rather UNIX. First if the issue is not updating – or ignoring an OS X update which demands restart – do it first. One quick fix is : 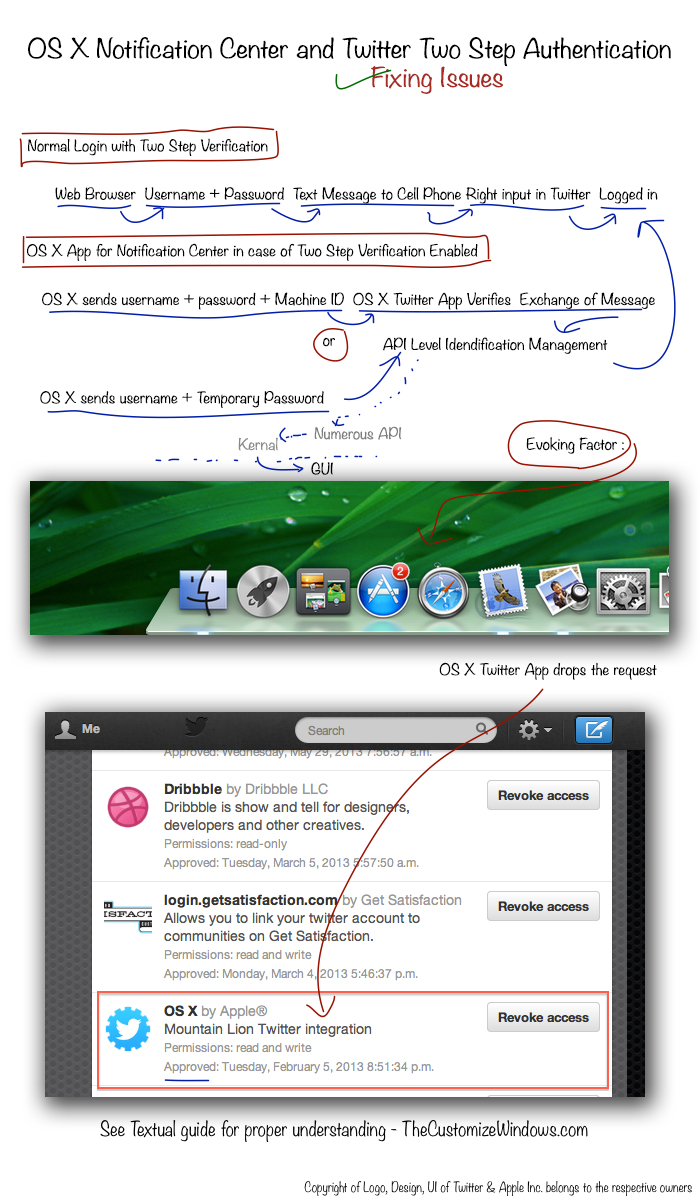 And generate a temporary password. Use that password instead of your normal password in OS X Notification Center’s Twitter settings. It will work for a hour. Now after update, still it might not work. In that case. First deactivate client (= your Twitter Account in OS X, frankly delete it), restart. Open your Twitter Account in Safari. Revoke the access of an App saying – OS X by Apple® Mountain Lion Twitter integration. Again activate it. Now configure Twitter for OS X Notification Center. It will work normally. Usually there is no need of deactivating 2 Step verification. Still if it create issue, again start from deactivating client, deactivating 2 Step, revoking and giving permission to OS X by Apple® Mountain Lion Twitter integration App, Configuring Twitter for Notification Center and finally activating 2 Step verification again.