Advertisement
You are here: Home » Multi-Core Processor Based Computer vs. Multi-CPU Computer
Advertisement

Multi-Core Processor Based Computer vs. Multi-CPU Computer has differences. For Servers, Workstations the processors are multiple plus multi-core on one board. We wrote about Multi-Core Processors before.It is important to understand what is Workstation computer and the minute difference of Server Operating System Versus Desktop Operating System. Mac Pro is only practical consumer market Workstation computer sold as single units. Other manufacturers usually has no consumer level marketing, the reason is simple – Workstation costs more and are used for specific purposes or by the power users.

We are talking in context of UNIX and UNIX Like OS, from the number of decades passed, *nix systems passed many many decades to prove their stability. Original Microsoft Windows OS no longer is used, the recently used Windows OS is OpenVMS based – these shows up as Windows NT family of OS. Operating System is important because all cores might not start working depending on the OS – see the tutorial on Activate all the processor cores when Windows 7 starts. The basic advantage Microsoft Windows gave at the initial time was reduction of ownership cost. But today with Free BSD variants of UNIX, Linux; Microsoft Windows practically need not to be thought by a high end user, even by consumers today. The free community based security updates of Free BSD is taken by Apple for OS X. So, Microsoft ‘manages’ their market by pre-installing Microsoft Windows on Hardware manufacturers’ computers for the consumer. Ultimately, a new computer user has no freedom, the buzz words are sprinkled via Ads and the user ends up with a laptop with Microsoft Windows pre-installed. 3 years ago we wrote how to create a bootable Windows 7 DVD for OEM PCs not supplied with installation disk and still people asks questions via email, comments. After spending $500, the user understood; there is no practical support for the Operating System from Microsoft. Pathetically, these computers are not manufactured for making the consumer happy – they are configured for optimizing performance of Microsoft Windows. You will add RAM and RAM, never you will be satisfied. 2 GB RAM honestly is quite huge if properly the Kernel handles it. The bottleneck remains mainly at Firmware level – they are fully closed source, no question of patching, updates.

Multi-Core processors are very much advertised as effective, but practical usage of Multi-Core is limited by many points from the Software end. On the other hand, it is not possible for an average consumer to buy a Mac Pro or a IBM’s Workstation or a Xenon Processor based server. Server hardware are never manufactured thinking about Microsoft Windows – the users are high end, they have good knowledge of History and Chemistry of Computing. You can think carefully – a Server runs 24x7x365 for several years, but a consumer grade PC dies quite earlier. Microsoft Windows performs pathetically on Mac Pro’s hardware when compared with a PC. Worst is, Apple manufactures Mac Pro with one Multi-Core Processor. So, the word mobility with multitasking is a kind of dream not yet reached. Apple is quite old hardware manufacturer – since 1976. Older than me. Due to mass marketing and iThings people knows the name of Apple, but actually 2 decades ago; people considered whether they will use an UNIX based computer or a different OS. Hardware and Software usually always fine tuned by the manufacturer, like you see with Apple Products now – the UNIX core is not created by Apple, practically OS X costs 1/10th of Microsoft Windows, pricing is nearly equal for other non-Microsoft paid Operating Systems. $20.00 or like that versus $300.00.

The topic Multi-Core Processor Based Computer vs. Multi-CPU Computer is not really that easy from users’ point of view – has many limitations – by budget, by size, by look, by features, by usability, by after sales service. Apple did the business trick by pushing a high end workstation to high end consumer market. As IBM like brands will not compete with Apple’s Mac Pro, the segment has no competition. It is challenging to manufacturer a laptop that costs $2500.00 – people obviously will think about Apple’s Mac Pro’s mobile brother – Apple’s MacBook Pro. But here is the issue – MacBook Pro is not equipped with Multiple Processors but with single Multi-Core Processor. We guess the reader has understood the complexity of the topic – Multi-Core Processor Based Computer vs. Multi-CPU Computer. 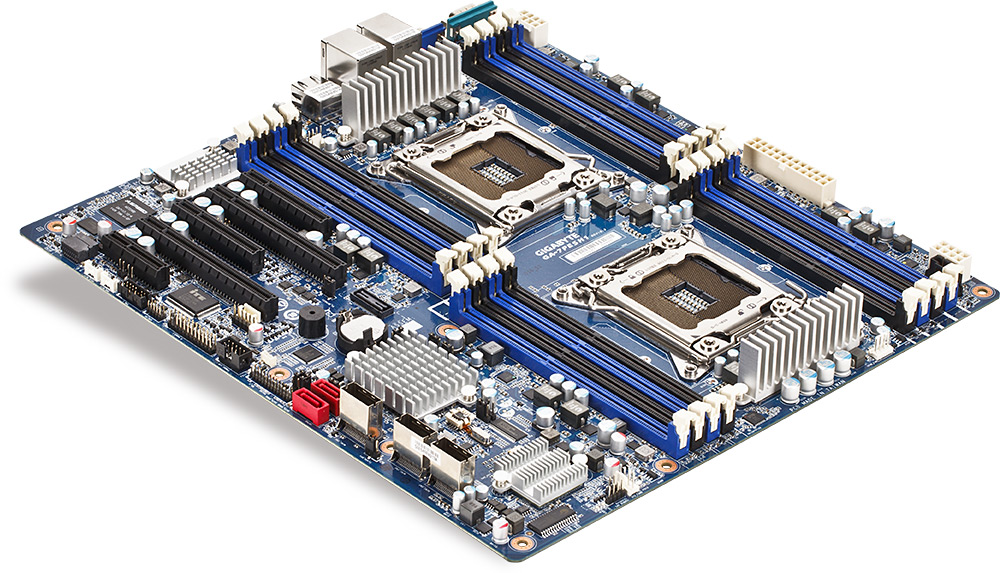 Simply, when you are adding a Graphics Card, you are adding a separate motherboard plus the CPU, Memory etc. It never matters what level of card it is – adding a separate graphics card always makes the whole thing closer to Grid Computing structure. Its not an ideal example, just to make the reader understand that the resource from the main board and processor is becoming free. Obviously, if add a separate Sound Card at least some resource of the main processor will be separated. We never think of Sound Card as processing of Sound is not resource hungry unlike graphics. Unfortunately, for marketing purpose, a computer with weak Processing power or less RAM is never provided with a Graphics card – technically that would be the ideal usage to help the weak main processor. A slower computer becomes more slow because everything is depending on one processor.

A CPU or Central Processing Unit, is what is typically referred to as a processor. A processor contains many discrete parts within it, such as one or more memory caches for instructions and data, instruction decoders and various types of execution units for performing arithmetic or logical operations. A multiprocessor system contains more than one such CPU allowing them to work in parallel. This is called SMP or Simultaneous Multiprocessing.

A multi-core CPU has multiple execution cores one one CPU as we said in the previous article. Now, this can mean different things depending on the exact architecture, but it basically means that a certain subset of the CPU’s components is duplicated, so that the multiple cores can work in parallel on separate operations. This is called CMP, Chip-level Multiprocessing.

For example, a multicore processor may have a separate L1 cache and execution unit for each core, while it has a shared L2 cache for the entire processor. That means that while the processor has one big pool of slower cache, it has separate fast memory and arithmetic/logic units for each of several cores. This would allow each core to perform operations at the same time as the others. In a multi-core processor each of the cores are generally slower (in raw speed) than a fast single-core processor. Also, all of the cores in that processor share the same system bus and main memory. However, for most daily tasks this isn’t a noticeable issue and for most users the system will feel faster as they are able to do more simple tasks at once.

There is an even further division, called SMT, Simultaneous Multithreading. This is where an even smaller subset of a processor’s or core’s components are duplicated. For example, an SMT core might have duplicate thread scheduling resources, so that the core looks like two separate “processors” to the operating system, even though it only has one set of execution units. One common implementation of this is Intel’s Hyperthreading.

Thus, you could have a multiprocessor, multicore, multithreaded system. Something like two hexacore, hyperthreaded processors would give you 2 x 6 x 2 = 24 logical processors from the point of view of the operating system. Different workloads benefit from different setups. A single threaded workload being done on a mostly single-purpose machine benefits from a very fast, single-core/cpu system. In a multi-processor system performance will be increased in cases where there are multiple high intensity tasks being performed. Depending on the motherboard this may be because each processor will have its own dedicated bus and/or main memory, allowing them to use the full capabilities of each for those tasks.

The pro and cons can be complicated as there are a lot of variables to consider, but some notable differences are:

Thus, a Multi-CPU Computer is usually the winner for the raw computing power, but unfortunately the companies pushes Multi-core simply because they are easy to manufacture and the profit is more. So, Intel’s consumer Ads are true for a Multi-CPU Computer which has multicore, multithreaded Processors.

This Article Has Been Shared 972 Times!

Articles Related to Multi-Core Processor Based Computer vs. Multi-CPU Computer