OpenShift Node.js Tutorial with Video is an excellent guide for anyone! You can create your own instance of Node.js Application within few minutes. Reads like commercial pitch! Absolutely not. Because, as a developer you can use OpenShift for free for three instances. Enough good for test applications. This is NOT a step by step guide. This is enough for pushing and running any Node.js application. Step by step guide only exists for specific applications, like WordPress. This shows the principles, in easy ways.

OpenShift Node.js Tutorial with Video : What We Said and Not Said!

OpenShift Node.js Tutorial with Video is not really for the beginners, yet; we guess an average user can follow this guide. We have some typical tricks, all tutorial blogs has some own tricks that makes the things easy, which is otherwise not possible to do following the official guides. Official OpenShift Node.js Tutorial with Video also exists ! That is also great and we have shown the webpage on video as mention. But, they are not Tutorial writers! They do not have some recipe to create some easy tricks. That is why the blogs exist. Otherwise what is the importance of having so many websites? Definitely, they know more than us. The way of representation makes the difference. Coming back to our current topic – OpenShift Node.js Tutorial.

Please try to understand this diagram, we drawn this while creating the video guide : 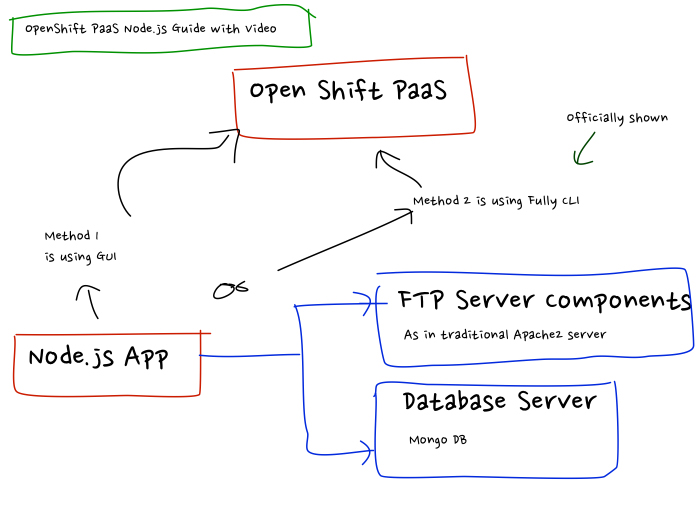 So, basically you need few things to know :

So, the OpenShift Node.js Tutorial with Video goes here :

Honestly, there is no other easy way to make anyone understand! You can search and go to the webpages we have shown in the video.