Tilde (~) is a character in the form of a horizontal wavy line formed of two equal bays. The character is used as a punctuation mark, as diacritical marks and as a symbol in some technical language. It was first used in the polytonic orthography of Ancient Greek, as a variant of the circumflex, representing a rise in pitch followed by a return to standard pitch. In modern time, it was originally written over a letter as a mark of abbreviation, as a “mark of suspension”, shown as a straight line when used with capitals.

In Medieval Latin and Middle High German refers to them as Ã± . It is commonly used in Spanish ( Ã‘ ), in Portuguese , in Basque. It is used as tone marks on Vietnamese vowels and they called the broken rising tone. As an accent character is the character in the mathematics and physics – read as “snake” – used for example for the identification of approximations. 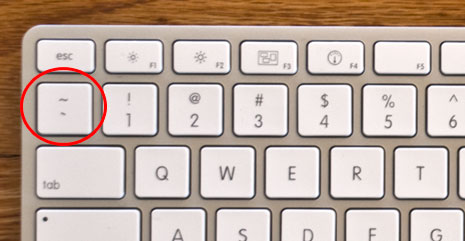 Under Unix and Unix derivatives such as Linux, BSD or Solaris , tilde stands alone for the user directory of the currently logged-in user with a username and behind the home directory of the corresponding user. This works in almost all shells such as bash, csh, tcsh, zsh or ksh. Even modern desktop environments like KDE and GNOME understand the tilde in this manner wherever file names are expected.

Under DOS, the files on the 8.3 format on, abbreviated with the tilde is used ( like dateiname.txt will datein~1.txt )

Tagged With can a tilde be straight instead of wavy , character names on keyboard under tilde