Monitor Network Traffic, Bandwidth Usage on CLI In Real Time with nload. nload allow system administrator to easily monitor the traffic. As we will describe the usage of nload on Single or Multiple Server for managed or unmanaged Rackspace Cloud Server, the reader need to edit the sources.list file to uncomment or check whether Universe Source is active. nload package is available on Ubuntu universe repo since Ubuntu Lucid (10.04 LTS). It has x64 package too.

Why We Will Need to Monitor Network Traffic, Bandwidth Usage on CLI In Real Time with nload?

As nload has too many package dependency, it is important to understand when we should use nload. Normally we use modern API based tools like New Relic or Rackspace has Open Source Cloud Monitoring Tool. For instant network statistics we can use ifstat or ifconfig. One can check the full official data here :

Actually, nload has a TUI (Text Based User Interface), in strict sense; it is not a CLI Application. It monitors the in- and outgoing traffic using two graphs and provides additional info like the total amount of transferred data and min/max network usage. It displays the total amount of data that has been transferred over a network device since the last reboot, the current bandwidth usage and the minimum, maximum, and average bandwidth usage measured since it started. 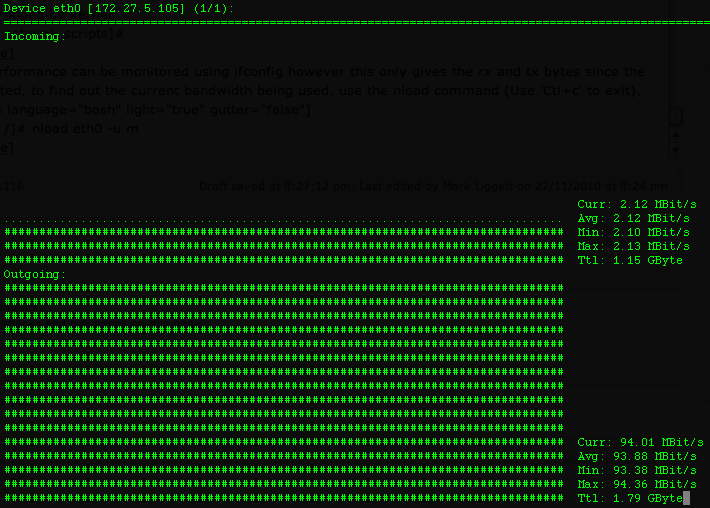 In case, you want to build nload on any unix like OS or for pure UNIX like OS X, you have to build it from source.