Before we can think to implement Twitter Card iTunes, iOS App links, first we should enable and get approved to use Twitter Cards. So, here are some guides :

We are taking that, you have already implemented Twitter Cards in some way or the other, may be you are using some solo WordPress Plugin or may be some SEO Plugin. This is the first step, you must pass.

Unfortunately, Twitter has not said in very consumable, palatable way. The first thing is that; use Header & Footer or some Plugin or Theme Function which will insert meta data in your WordPress Website. Clearly know – these set can reside a bit far way from the other Meta related to Twitter Cards.

This is called Link Maker of iTunes :

Basically, that is used to create Buttons Like this :

Irrespective of type of App, you will find the Link, looking like this :

twitter:app:name:iphone is the Name of your App. twitter:app:id:iphone is the number we have shown above. But, what will be the URL in twitter:app:url:iphone ? Here is a trick. What I found, appending the ID after the Equals Sign makes it a working link :

This is the URL which triggers to open the iTunes App Store. Actually, the whole proper URL should be :

As I used a Podcast URL to test, &Type= is not required. It will only be required if there are two same named Apps. Three things for one set – iPhone, Three things for another set – iPad. Total six lines : 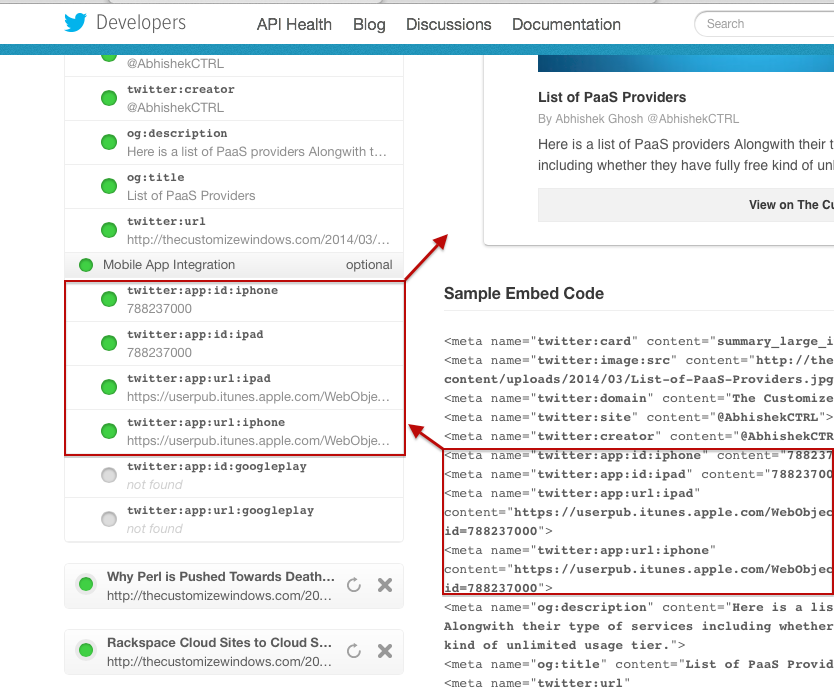 The complexity is made as there will be peoples who can abuse. Now if you test; it will pass.