Apparently, most of our visitors are from both EU Region, Canada and US. Despite the Video Guides are meticulously created, many unfortunately have issue with my accent. Obviously, I am trying to change my accent towards the normally spoken English, but a quick fix suggested by a regular viewer has been adapted – we have added the transcript as English Text on the videos like we usually see in far Eastern version of Hollywood movies!

Anyway, we are using iTerm2 and oh-my-zsh as Shell on OS X 10.9 running on a 15″ MacBook Pro. Windows Users will need to use PuTTY for Microsoft Windows. FileZilla can be used as SFTP software. All softwares are Open Source and Free Software.

Tilde (~) represents starting of a command, you must not copy that part plus the leading space; you will copy paste only the command to your command line tool. Hash ( # ) represents our instruction.

What is not shown

How to generate SSH Keys on your computer and paste on Rackspace Cloud Panel before you spin a server has not been shown. This is for our security.

It is quite easy and is Web GUI  Based. It needs no command but gives us the IP, Password should be copied.

SSH to the remote server

SSH to the remote server demands the specific IP address. The command should be used on any Terminal Emulator on Linux, Mac or via PuTTY on Windows : 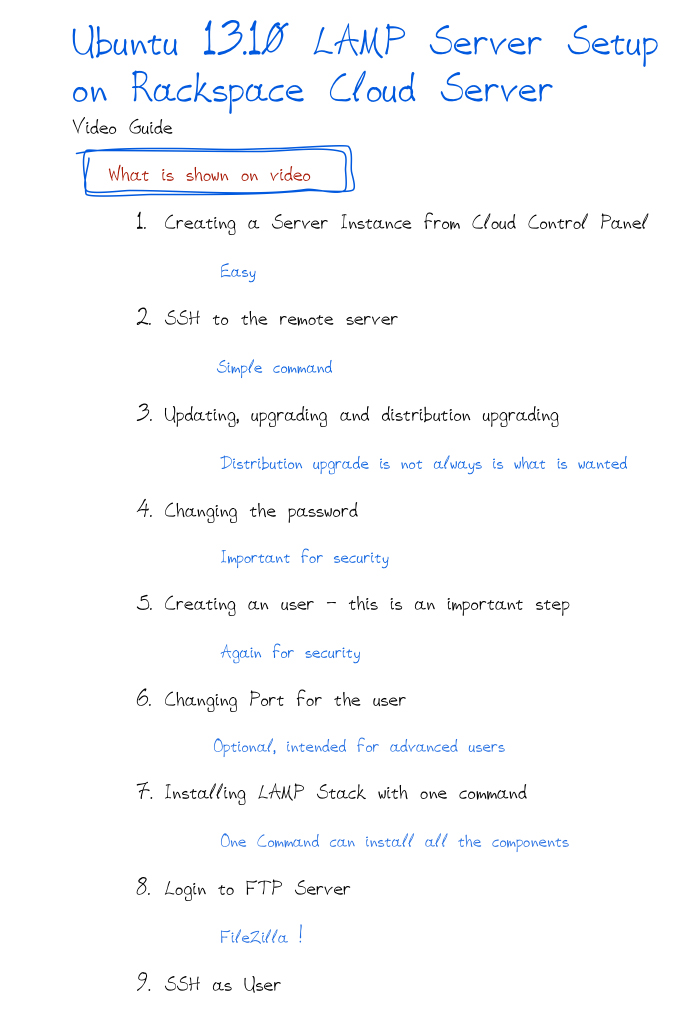 It is quite easy step. && joins two commands; you can use separately :

It is also quite easy. You just need to type this command :

Creating an user and giving the root Privilage

But, the next part is difficult :

Output is a config file, ^ means you need to hold control key plus that specified key, example can be ^W ; which means it writes the file. We will edit this part :

Changing Port 22 Changes the port number to connect. PermitRootLogin if changed from yes to no, root will be unable to execute commands. That is why we have :

These PHP extensions are usually required but not included in LAMP-Server^ one command installation :

This Article Has Been Shared 269 Times!