VMware acquires CloudVolumes, the startup that abstracts the applications from the operating system. CloudVolumes, is one of the last purchase by VMware, which has the aim of strengthening the desktop virtualization offerings. The startup had a software which used to deal separate applications in the virtual machine from the underlying infrastructure (operating system included), so that they can move from one work environment to another, instantly.

“I™d like to briefly tell you the CloudVolumes story and explain why our technology will change how customers think about application lifecycle management”. – Wrote Louis Cheng in Official blog, “I™ll borrow an excerpt from a blog I posted prior to joining CloudVolumes when I was just beginning to realize the potential of the technology:” œ[CloudVolumes] achieves this by installing applications natively into storage and then capturing them as VMDK/VHD stacks outside of the OS, which can then be distributed. You may think this is just like application packaging with App-V or ThinApp but it™s not quite that. They natively store the bits as they are written during the install, in a different location, and then take note of things like services, which are started and roles, which are enabled into the OS. These are then ˜put™ onto the AppStack volume, and when complete (which can span reboots, and several apps or dependencies being installed one after the other) you tell the agent through a dialog in the provisioning VM you are done, and that VMDK/VHD is then locked as a read-only volume which can now be assigned to others.”

Nothing relating to the financial details of the deal was revealed. In this year, AirWatch was acquired by VMware for $1.54 billion. In 2013, VMware acquired two companies for a total sum of $289.0 million.

The purchase of VMware is not yet the light of an interest in the company in respect of deploying applications in the server (the area where CloudVolumes worked) : behind the arrival of the startup is in reality the desire to reinvigorate the portfolio of services for desktop virtualization in a single Horizon.

As stated y Sumit Dhavan (senior vice president and general manager for desktop products and end-user computing at VMware) with the new software, customers will be able to create systems of application delivery in real time. For businesses this will mean to have a centralized management of applications.

VMware Acquires CloudVolumes : What Conclusion Can Be Drawn

How exactly CloudVolumes works? Simply it redistributes the software in more than one container (actually the term used is application management containers) the elements necessary for application delivery procedure : first in a container, then middleware, applications and settings while in a second one theconfiguration licenses, files and data. The container can be subsequently transferred, in an instant, in the new workplace. Below you can view the detailed info graphic: 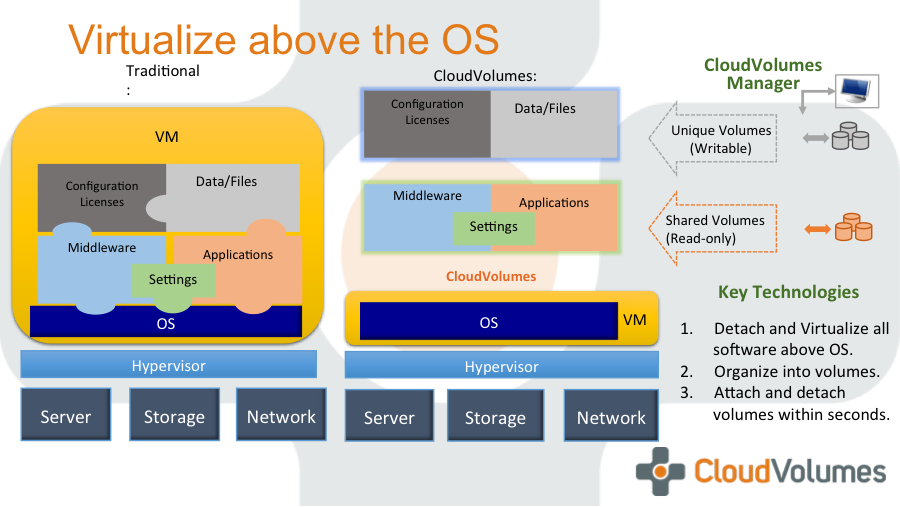