Mesosphere, collected a new financial fund of 36 million dollars for the IT solution based on Apache Mesos, bringing the total resources available nearly 50 million dollars. An important figure that the company wants to invest fully in their expansion of the commercial launch of the new operating system for data center unveiled recently and designed to allow the aggregation and management of computational resources and application deployment. DCOS or Data Center Operating System, is the name chosen by Mesosphere for the OS based on Mesos and capable of abstracting CPU, memory, storage and other computing resources from physical servers, to bring them together in a single management platform which is easily scalable. According to Mesosphere, this operating system, currently in beta, will allow the IT administrators to scale the cluster data center by adding up to 50 000 servers. 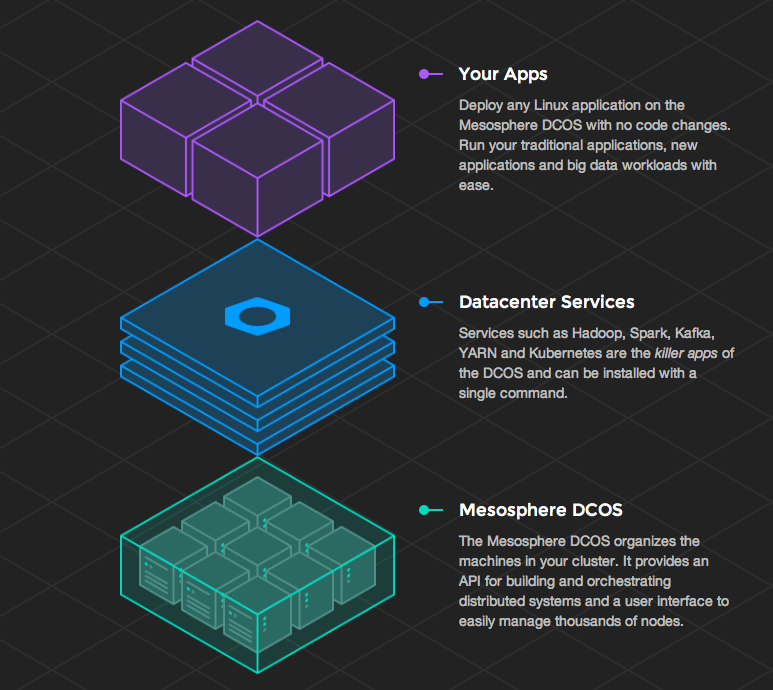 Mesosphere Data Center Operating System is Based on Linux OS

The base of the DCOS is a set of open source tools that many available via Apache Licenses. These tools is based on a distributed system kernel, which provides the necessary APIs for the management and organization of distributed applications. Among the components of the new operating system for cloud computing, there are a distributed system init (Marathon), an activity planner distributed (Chronos) and a service discovery (DNS). The architecture already supports and compatible with Apache Spark, Apache Cassandra, Kafka, Hadoop, YARN, HDFS and Google kubernetes.

The flexibility of the new operating system is the ability to support all versions newer Linux distributions including CoreOS, CentOS, Ubuntu and Red Hat; by the opportunity to run on premise, on bare metal or in a private cloud environment. The compatibility with major public cloud providers includes AWS, Google Compute Engine, Digital Ocean, Microsoft Azure, Rackspace and VMware vCloud Air. This Operating System will be supporting other data center management tools as OpenStack, Cloud Stack and VMware vCenter Orchestrator.

With DCOS, all the available resources in a data center can be easily manipulated through a command line, but DCOS offers IT administrators a graphical interface that allows you to check the status of applications and services running on clusters. The new funding will allow Mesosphere to get out of beta and propose DCOS in two different versions, one with a fee with technical support and consulting service and a free community edition.

Officially after announcing the funding, the CEO and co-founder of Mesosphere, said that, DCOS is an operating system capable of addressing the most important inefficiencies with which applications and services interface now leverage the computing resources. The mission of the DCOS is to bring automation where automation makes sense, to give the developers and IT operators granular control of their operating environments.

This Article Has Been Shared 419 Times!