Apple keeps the Nano in 2.0.x version. Homebrew-dupes do not upgrade Nano anymore, why all do not like Nano to get upgraded will be discussed later. You can follow our guide to upgrade Nano in OS X in the guide for OS X Nano Syntax Highlighting. Only add this flag while building :

Do not follow rest of the guide. Now, do these steps :

That /etc/nanorc is a read only file unless you use --enable-nanorc during building it. If you add ~/.nanorc, it might create problem. Paste this line on either /etc/nanorc (ideally) or in ~/.nanorc (create it, it will not be present by default) :

You will get Syntax highlighting more than default. This is my current repo on GitHub for Nanorc. Star the repo, I will update it. When I will update, you’ll also update again.
Test any file on your computer including Nginx Files.

Without the flag, adding the line on /etc/nanorc, will not work.

Nano is already in updated version. Be you are a user or the root, does not matter, the commands are same :

As that /etc/nanorc is a read only file unless we have not got the chance to build Nano with --enable-nanorc flag, we have no other way than using ~/.nanorc. Paste this line on ~/.nanorc (create it, it will not be present by default) :

Open any nginx file with nano like /etc/nginx/sites-available/default or /etc/nginx/nginx.conf. Getting color? If you do not get color, that is for so many commented out stuffs on default, remove them, you’ll get color. 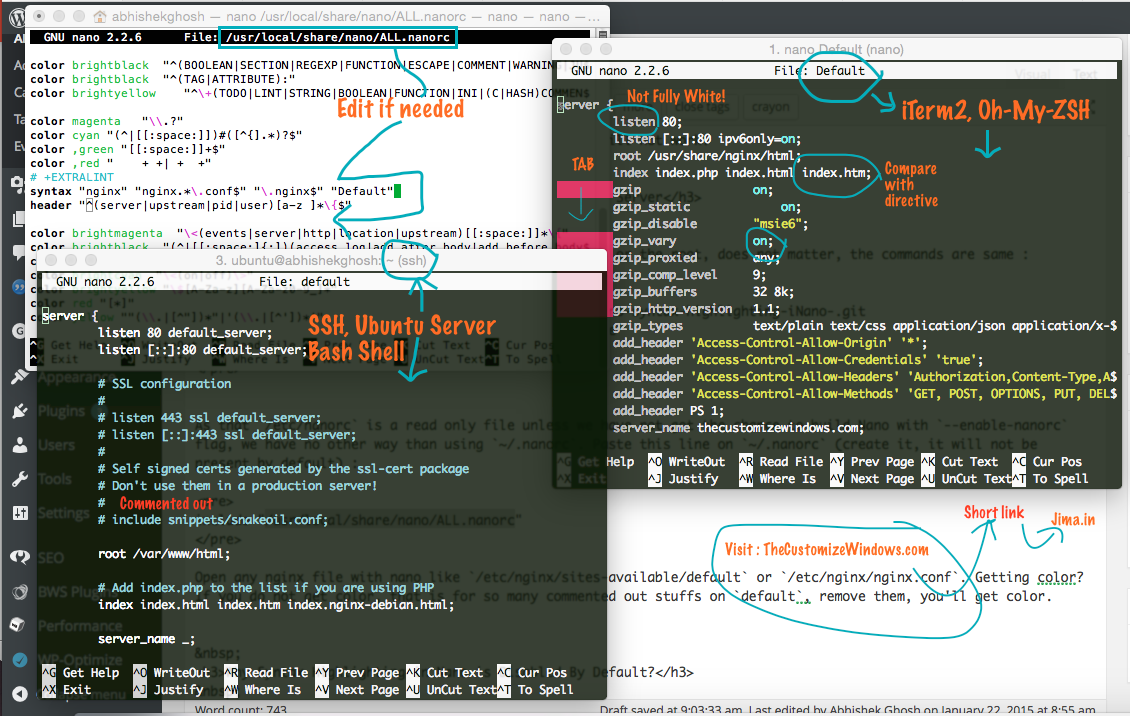 Why Syntax Highlighting in Nano is Disabled By Default?

Nano’s syntax highlighting is kept to off to avoid segmentation error. Apple probably does not upgrade Nano out of fear. Maybe, Homebrew-dupes discontinued for the same reasons. We have some collection of nanorc files – on the Github repo, the script concatenates all the files to one; you will not need to add so much lines. We are including in this way :

If you know more .nanorc, you can send a pull request to add.

We use .zshrc on all my Macs, MacBooks with export PATH=/usr/local/bin:$PATH on both .zshrc and .bash_profile. As Nano is not the system default text editor, unlike vi, there is no fear, you can build the latest version.

Our .bash_profile has that only one line. There is no .bashrc. It is impractical to comment out so many includes on the fly.

When Nano was ported from Pico – http://www.washington.edu/pine/getpine/ , then it had another name. Again it was re-written with the Nano name. At anytime, Nano can throw segmentation error if you are using Syntax Highlighting. Nano supports both nanorc and .nanorc, even nanor.c. The files can be kept at /usr/share/nano or at $HOME or /etc either as nanorc or .nanorc. That segmentation fault or segmentation error can happen occur under some of these circumstances:

So much is not said, only people says – “Vi is powerful editor”. Powerful means, it will not throw abnormal errors. Chance of error increases if you use Syntax Highlighting in Nano.

This Article Has Been Shared 854 Times!