Here Are 7 Tips To Run WordPress Blazing Fast on HP Horizon Cloud i.e. HP Public Cloud. Tips are from our 6+ years experience of running WordPress. We are publishing articles on Cloud Computing when Cloud Computing was not a buzz word. HP Cloud and IBM Cloud both are great in our opinion and one should pickup from these two for enterprise grade setup. Rackspace is too much consumer grade and lacks own production of Hardware. Digital Ocean has not huge difference of pricing starting from the medium range of usage. Digital Ocean is risky to use for high load servers where OpenStack with whitelisted floating IP is required. The behavior of HP’s Engineers are really nice and we are more satisfied than using Rackspace. Rackspace is even not good for DevOps or SysOps – you can hire a System Engineer as permanent employee instead of paying $5000/month. HP and IBM both manufactures the main hardware. If you have lesser budget, then use Free to paid OpenShift PaaS.

7 tips itself a buzzword to attract you read this article. It is definitely a good article, many points will not be known even to an experienced developer, but 7 is actually to less. We have not counted that hosting point, for example.

Use Same Server Database With Replication on Different Server

Using the same server makes the connection to database faster. But actually it is risky. MySQL can be replicated on different server. So, instead of using a separate database server; you are using a replication server. Optimized amount of network IO as we need to transfer the data somehow actually never can eliminate the slight time of initial connection with another server. It is becoming fail safe but having the higher speed – within a computer, the connection will be faster than over the network. MariaDB is preferred over MySQL and Major Hayden’s script should be used to optimize MySQL server with InnoDB.

Use Akamai CDN and DNS Servers With High Caching

You’ll get both with HP Cloud as paid branded services. You can use Akamai’s services separately. Akamai’s services are used by all – IBM to Microsoft for their own need of CDN. Good DNS Delegation with high caching, makes the initial connection quite faster. Test our website’s webpages from 2011 on webpagetest. 2011 because we might be flashing the cache and it might go rebuilding from the old dates.

MaxCDN’s older service named NetDNA was a second choice. Akamai is the king in this segment. You must need to use a instance with multiple virtual cores and higher RAM. 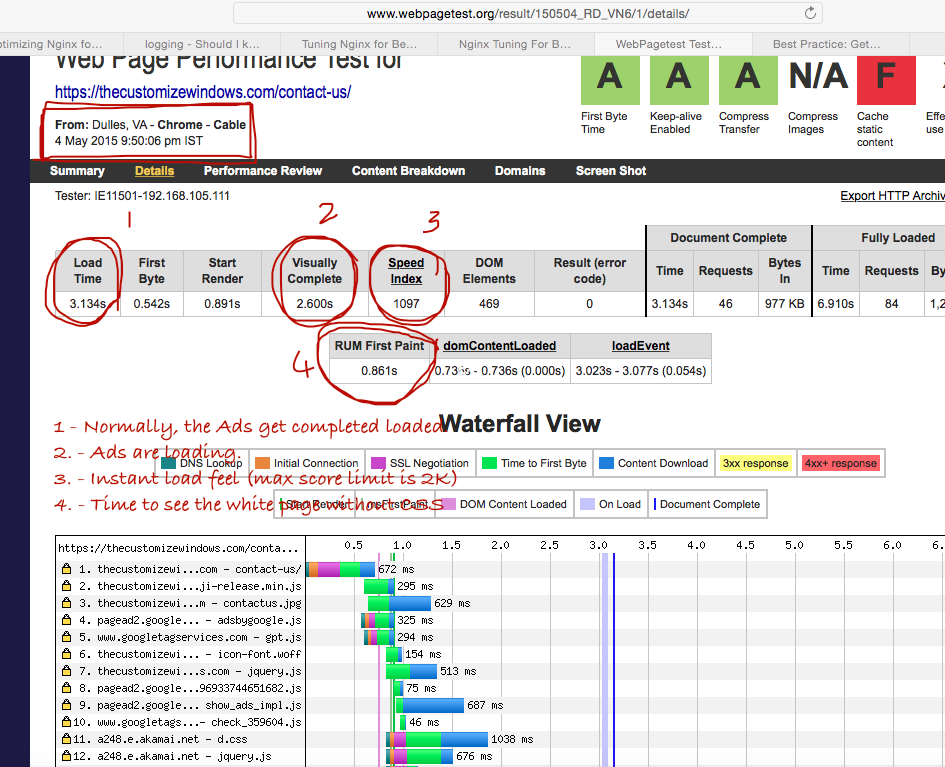 Very Few WordPress Plugins Are Ever Needed, Only Few Themes Are Good

There are only few theme framework for WordPress which are great both at page speed and SEO. A custom design child theme with warranted score on Google Page Speed will cost over 5K USD. It worth the price if you can not redesign yourself. Some WordPress Plugins are almost part of WordPress – W3 Total Cache, Ad Injection, Crayon Syntax Highlighter, Developer Share Buttons, Header and Footer, WordPress Database Backup, WordPress SEO, WP-Optimize and Yet Another Related Posts Plugin are some of the few. Others things are hand coded in to the child theme.

Apache2 is the standard web server software, but Apache2 is too heavy and not required for running a simple website. Nginx with PHP5-FPM gives better result than with HHVM after right tweaking. People will tell you that HHVM is better. But do a deep search, you’ll see the analysis of performance by the experts.

XCache is the Best Caching System

XCache does the best for WordPress. Zend OpCache is good but we have seen better result with XCache on all the IaaS we mentioned.

Avoid Using custom made solution, use the commonly used versions tested by many users which crossed Free Software Foundation. Nginx Microcache will give you better caching result after Akamai’s cache server caches the webpages.

Our each webpage loads within 3-4 seconds with 92 page speed insights score and very high score on SSL Lab’s tests. This combination of score is unbeatable and you can not show much higher score with so many Google Ad units on each page, so high number of posts. We optimize our database at regular interval by SQL experts with proper degrees. This result is desired and actually the platform is designed for it. Next level is like Facebook’s setup – own custom web software, own datacenter and lot of dedicated engineers. Modifying WordPress in own way converts to a custom software – if the web software becomes a bit modified, for example; the default theme becoming a Theme Framework’s theme, it gives lesser threat of being hacked and unequally PHP calls are eliminated.

Be careful about the doubtful Indian services. Good service from India will cost the same that of EU Nations or US. No US company send us “offers” to “optimize”, but we get “offers” from Indian ponzi companies. We have no web optimization service. Frankly, they’ll neither understand what Public Key Pinning not system load. We do not spend for this website only. This is a part of all business. You need to plan and divide the works and hire known freelancers.