Advertisement
You are here: Home » Fix This pull request contains merge conflicts that must be resolved
Advertisement

Fix This pull request contains merge conflicts that must be resolved error in git or Github. The error is quite terrific looking but has fix. We talked about common terminologies used for revision control softwares and also talked about git. This error is common with Github where you are a user / contributor and project is owned by someone else. First it is important to know why it happens and what is the official way to fix it. Then we will tell you a cheating method for quick fix.

Why This pull request contains merge conflicts that must be resolved arrives?

You have not updated your fork with the official one. Your head is lagging far behind the current one and you are trying to change only few files. Officially you should run git status, then :

Then if you run :

Basically, you need to rebase and force the push :

But, chance is that you will get 403 error. Sad truth. You are not the owner. Due to hundreds of security related stuffs, these methods can fail. But that is official method. I blasted HTTPS Everywhere project with 9K file changes in one commit in that way, it is good that peoples are somewhat known there; otherwise people will get angry and kick out. 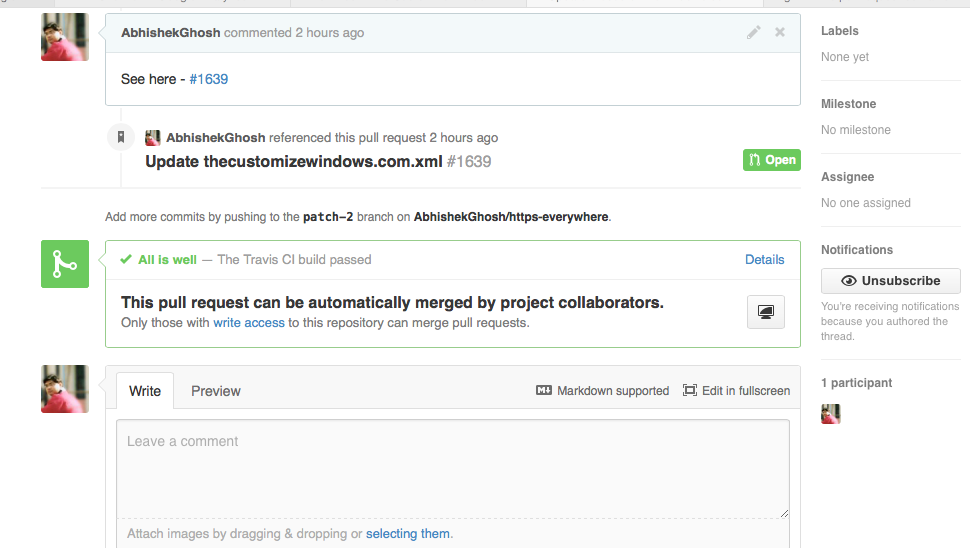 Above is a screenshot after applying the fix written below.

Fix This pull request contains merge conflicts that must be resolved

Delete the forked project from – Github Account / git account on other server. Freshly fork it via GUI. Then, what you’ll do; cd to a different location on your computer to git clone this new repo (or use a different name in the same location). Then do the changes in your local computer and push it to your repo on Github / git account on other server.

You can send the pull request via web GUI on Github Account / git account on other server or via command line. This will not disturb the owner of the project with 9K updates or something horrible figure like that. Build will pass Travis. Yeah, it is not exactly quite “scientific” way, but book does not talk about the consequence of sending a pull request with 9K changes.

This Article Has Been Shared 604 Times!

Cite this article as: Abhishek Ghosh, "Fix This pull request contains merge conflicts that must be resolved," in The Customize Windows, May 8, 2015, January 24, 2022, https://thecustomizewindows.com/2015/05/fix-this-pull-request-contains-merge-conflicts-that-must-be-resolved/.
Source:The Customize Windows, JiMA.in