After Snowden Reveals, Common Internet Users Understood the Truth Behind. Here is How Deep Web & Dark Web To Fight With Mass Surveillance. We will learn many things around creating near 100% secured websites, but before that; we need to learn, check and recheck to make it sure that the agents and data thieves can not disturb the Freedom. Again a small revise – Microsoft, Google, Yahoo, Amazon, Skype are already marked (and proved) Governmental agents who steals data. Richard Stallman is the founder of Free Software foundation for whom we are using GNU/Linux with a practical license and Edward Snowden is the person to prove many assumed thoughts. You should read about PRISM, NSA’s Mass Surveillance on Wikipedia. These are not sci-fi stories, these are the real facts. Freedom does not mean that one will violate the “norms”.

Pseudo-top-level domain is a name for a computer network that is not participating in the official Domain Name System (DNS). Our website uses a Top Level Domain – .com.

Tor Project is an important project, that is the project which is now motioning the official HTTPS Everywhere list – it is a list of HSTS websites like that of us. Number of HSTS websites are not exactly huge (data of June 2015), not even 500 on this Earth. Many HSTS are on 301 redirect or are CDN. HSTS offers some sort of security. Network Protocols are normally intruding at this point.

Using Virtual Private Network somewhat secures the connection. If we encrypt a connection in a serious for multiple times – the change of tracing becomes difficult.

But there are problems with the conventional DNS system, to circumvent it; Deep Web & Dark Web actually developed. Normal web search engine bots can not spider them. .onion, .exit, .bit are examples of pseudo-top-level domains. They are intended for the hidden services. Hidden means, hidden from the mass surveillance. Tor is Free Software for enabling anonymous communication, it is a protocol itself to connect with the services.

Dark Web is a public World Wide Web content that overlay the public Internet and require specific software, configurations and authorization to access. Deep Web is the special search engines to index them. This Dark Web can be thought as a different Internet – its free from Google’s tracking javascript, looks like the Internet of ’90’s. Obviously, like we have said in an another topic about Google’s silent death; there are banner ads used on the Dark Web, like we used on 1990 on websites to earn money. Direct link. This “mass surveillance” running internet is called “clearnet”. It is clear to the NSA’s agents. There are many NSA from many countries.

In short, one will need a Tor Browser to connect to these most of the services. But if your computer is exactly set like how Richard Stallman describes, your typing on keyboard can be traced by various backdoors, malware and tojans. So, it is important to use a safe hardware as computer with Free Software running on it.

On the clearnet, means this Internet you are using; is full of tracking Javascript and most common commodity is SEX or rather Pornography. Dark Web was not intended for creating porno hub, but they also use the system. If we do not like, we will not watch, quite simple. There are REAL brothels are running on this earth including one office of an American President. The data which we commonly know are tip of the iceberg. Political matters will uncannily enter because they basically loves to divide human and run costly luxury cars. You can not say against Judge or President – exactly like you can never say against the kings. In the same way, on Internet, these same peoples via agencies imposed their long running monarchial rules.

On this clearnet, it is near impossible for a real journalist to find the real data – how a Pakistani homeless is living if you are an American or Indian. These are very risky works and the unfortunate result of taking photograph of very sad economical condition is usually committing suicide or murder in some way. Yes, these are related with Digital Photography.

Configuring hidden services for Tor is described in official Tor Project’s website. We can use our own computers or servers to host an onion site. Facebook, in this era of data protection running their own Tor website – https://facebookcorewwwi.onion/. Facebook works as Agent for data stealing – basically if the website host is bad, there is no way to stop data theft. If you want to only surf the onion websites, it is quite easy – simply read Tor Project’s website.

If you want host an Onion website, the server configuration part is somewhat like normal web hosting, but extra precaution are required like – not to run anything else on the server, avoiding exposing the other services from the provider, you must use the VPS in an way that the provider do not understand that you are running a Tor on the instance – like you can fake it to be used for database. It demands quite good knowledge on networking to “fake such”, mail server should not run on the server, web designing should be light with inline resources, avoiding Javascript, error message etc. and the server’s security must be top notch because NSA like agents will try to intrude. Yes, you’ll be able to see the logs – it is really practical part of PRISM. They’ll also use top notch encryption. Server OS better be from Free Software Foundation and Web Server being Apache2. We will install the system to host Tor later as an example but roughly, the servers hugely prone to get hacked. All packages like wget, rsyslog… we actually can not convert this website to onion with just 1 step. That WordPress has lot of tracking, we need to use simple webpages like plain HTML, hardly plain PHP or Python. More softwares will run, you are at risk.

One can actually make money by running a Tor website. You need to use Banner Ads. If you fail to maintain the security and have “sensitive content”, NSA might hack and put a webpage like this : 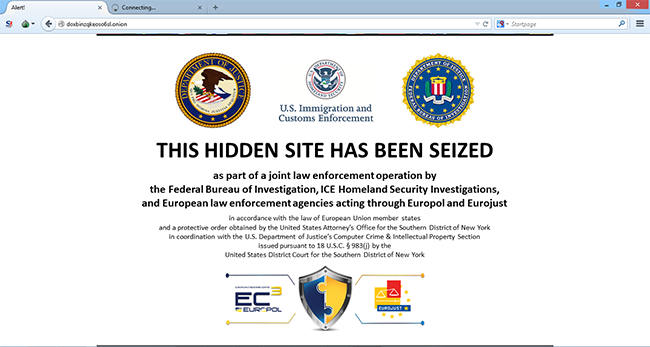 Sensitive content can be a simple blog post like this one which you are reading. If you are too noob and has more sensitive content, then they will pluck you like a ripe fruit, put in a cage and fetch huge money from you. Thats a Tax for not doing the “right”. Jesus Christ was also wrong!