Difference Between Cloud Computing IaaS & VPS Hosting : No Difference From One Perspective

VPS and Cloud Computing are the same damn thing when we think about a dedicated server, which is a physical server setup which is not sharing resources with anyone else. It is quite costly and most cheap dedicated are not really dedicated and they need a Blue Pill test and what is not possible to check sitting outside a datacenter is the networking part. Dedicated rarely required for running simple websites. 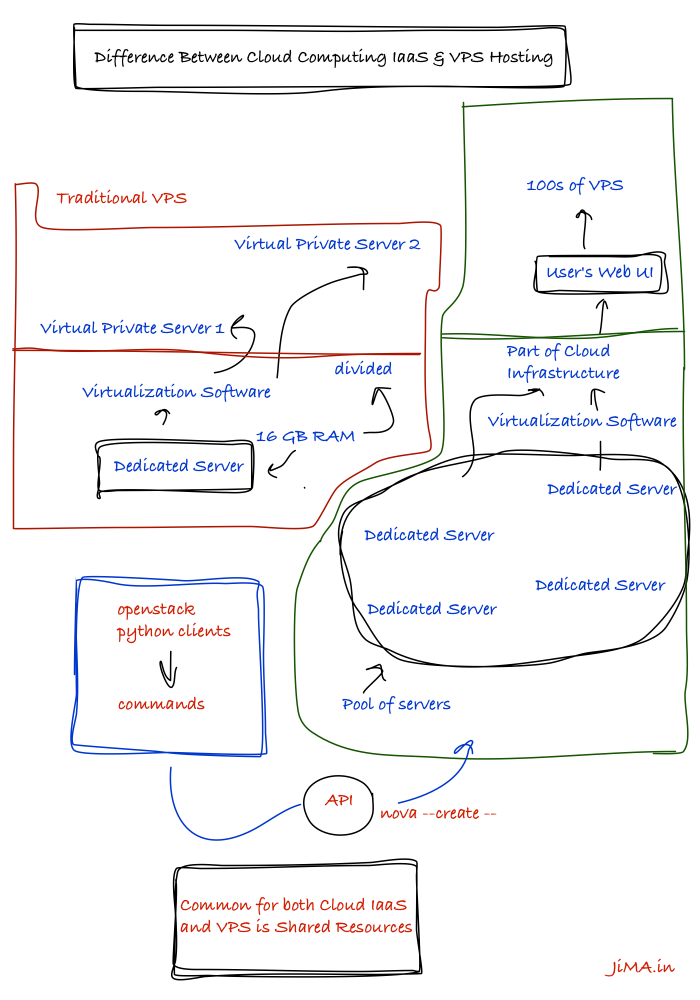 Cloud and Cloud Computing are hugely abused phrases. There are reasons why Richard Stallman says it is fools computing. Service Oriented Architecture (SOA), Multi-Tenancy, Scalability, Redundancy and the Billing structures are typical of Cloud Computing Infrastructure as a Service (IaaS). We can achieve scalability using non-virtualized dedicated servers but it is a bit more difficult and expensive. Cloud Computing just makes it easier.

Cloud servers employ more automated in deployment using SOA, we perform this programmatically using an API. This may require significant architectural changes to the environment. Traditional VPS will not perform “automation” based on SOA or API. The automatic, ready to use services are mere scripts written in any programming language. Traditional VPS is just simple virtual server running guest OS like we run Ubuntu with VirtualBox on our MacBook Pro, where we can adjust the hardware resources that actually cost money. Traditional VPS functionally is just a virtual replacement of dedicated server, we can not increase the virtual RAM so easily. Traditional VPS is a virtual server running on top of some hypervisor. The layer of software to isolate from the physical resource is less complex and closer.

Using one 2 GB server to install WordPress is basically not Cloud Related. Yes, as the networking speed expected to be faster than average quality traditional VPS service provider, the speed might seem to be faster. Traditional VPS demanded a sysadmin – a human to manually work to allocate the server. But on Cloud IaaS provider, we spin the instances ourselves. The resource limit of running 100 instances at maximum per account is deliberately set by the Cloud IaaS providers to simply avoid the chance of DDoS via a users hacked account. On request, they usually increase the limit.

The way, a Cloud Software like OpenStack is installed to create an IaaS is not exactly like how the traditional VPS are created. One Cloud IaaS Instance is a VPS itself. But the hardware is not so easy solid concept, it is fluid. The way we install a web software on Cloud IaaS is actually different that from a Dedicated or Traditional VPS. We usually use multiple servers. We try to increase the service continuity. Scalability and Service Continuity are not exactly the same.