There are some differences between a Cloud Computing IaaS and a Traditional VPS. Specially with PaaS like OpenShift, Heroku and IBM BlueMix; a new tier has been created – real free hosting from a good, reliable provider.

Cloud computing is continuing marching and it also seems to have positive implications on the server market. For the first time in four years, the main sector companies like HP, DELL found a sustained growth of shipments and revenues. The usual figures from Gartner are helpful to better understand what we’re talking about – shipments in the first quarter grew by 13% year this year (2.7 million units). Gartner indicates that, thousands of servers that make up the distributed systems at the base of Big Data and cloud infrastructures will continue to grow.

So, there is a definite need of less costly but effective and reliable hardware. Here is a size of such ARM powered board : 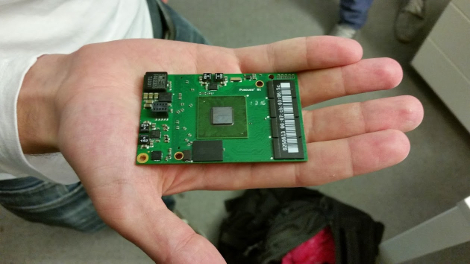 At a recent summit, Red Hat announced that the preview of their latest operating system on the enterprise-class server was running on ARM processors. The demo is of Red Hat Development Preview Edition 7.1 and shows the analysis of real-time data for cases enterprise. The announcement shows that the ARM servers are already available and are fully capable of supporting large workloads. The demo in question showed a stack with 64-bit ARM processor, a server platform, operating system, Red Hat hypervisors and applications coupled with Apache Spark.

The first manufacturer to announce a chip for the new instruction set was AppendiedMicro, which was also the first to produce X-Gene processor. Usage has been very slow, albeit already has a steady growth. Today the servers with ARM 64-bit processors are mostly designed as web-server. Meanwhile HP, with the use of X Gene in its ProLiant Moonshot servers, has shown that the ARM server can also run software for the analysis of real-time data. The server can then compete with ARM processors with Xeon-based x86 processors.

AMD and Cavium have recently announced the production of ARM processor-based servers. AppliedMicro also will release by the end of this year, or early next year, the second generation of its chips X Gene. In November of this year, version 7.2 of Red Hat Enterprise Edition should be released.

The Red Hat Summit a few days ago showed that the ARM server, using X Gene, are ready for deployments and can support large workloads in real time. The momentum of ARM server, therefore, is expected to strengthen in 2016, as suppliers will be ready to enter the market for 64-bit ARM processors. The advantage ARM ecosystem, in fact, is that it does not rely on just one company, but there is a collective effort of many companies around the world to standardize the ARM architecture.

This Article Has Been Shared 199 Times!