Mandrill is a Cloud Based Transactional Email Service. It is Common to Get Email Warning on Mandrill Account Poor Reputation. We are talking about Cloud Instances (IaaS), VPS, Dedicated Server etc. This is not for shared web hosting. We can not find any reason to use $15/month shared hosting when $10/month 1GB instances are available. We actually have guides on Cloud Based Transactional Email Services, XenForo Mandrill setup and snippet for WordPress to easily use Mandrill. These, however are not exactly related to the topic. We would suggest not to fight with your issue but read this article carefully first. It is not your software or setup issue. We use Google Mail for Domains (old name) plus Mandrill for easy setup – it avoids postfix.

Mandrill Account Poor Reputation Email arrives mostly against the free Mandrill accounts from our overall idea searching the web. Basically as Free email service is a freebie, marking with Poor Reputation limits the number of email delivery. In other words, this is just the another limitation of any freemium service. Officially extensive list of reasons exists, which could be read from their official website.

That free friendly/devil alert warning probably counted as 1/day email usage. It is either their natural bug or deliberately created bug.

Servers have a permanent IP address! That IP or even the DNS provider may be changed on our wish or need. We saw that it triggers this phenomenon quite faster. In other words – keeping a reverse proxy instance running Nginx, for example would be a good idea. It will only pass the backend if caching not needed. This is also great for higher security of the backend.

In any case, when change of IP or DNS provider is expected, switching off the domain from Mandrill Account will fully reduce the change. This is not easy work at all.

When disease already has occurred, i.e. Poor Reputation is nicely awarded, then there are few ways which may work. One of them is switching off the domain from Mandrill Account and changing another transactional email service provider. First check whether others’ domain got added in your sender domain list. Obviously, if full Hotmail got added, there will be spams : 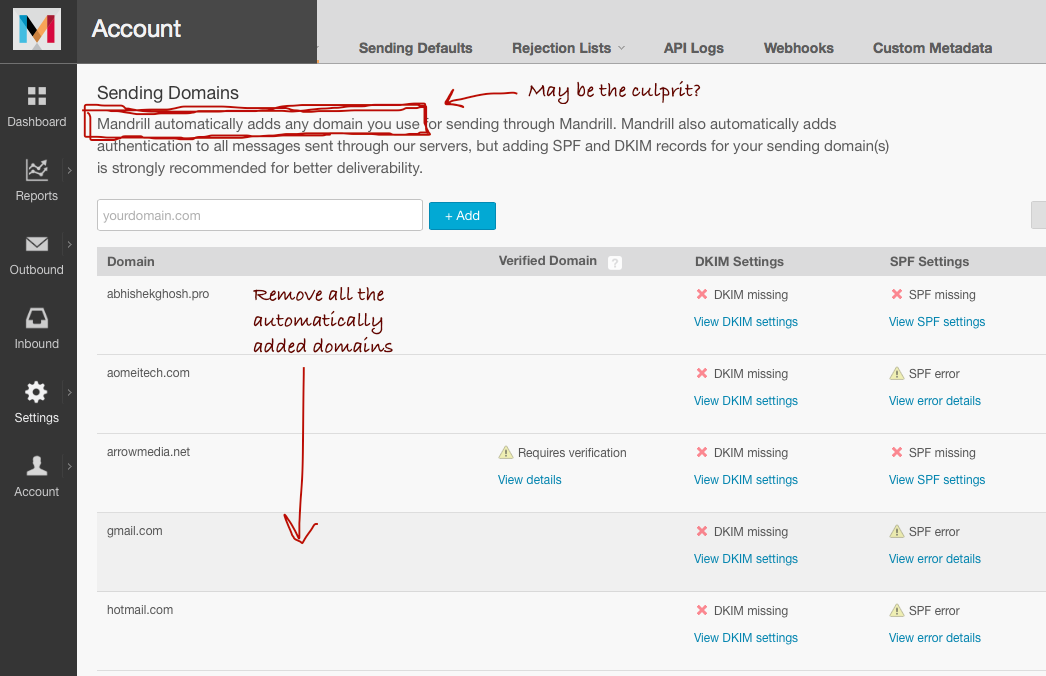 We are victim of Mandrill Account Poor Reputation but we had not a single spam, bounce etc. reported by Mandrill’s web GUI software. So – the spam checking service is a different service which is probably joined by API or other way to their web interface. So, practically if you send billions of spam with good reputation, possibly Poor Reputation will not be marked as Spammy work. SPAM checking stuff is one level up and has the bug (or a deliberate bug).

Among the others (which are commonly said by Mandrill but we have not noticed any big relationship) :

Host matters. HP Cloud is resistant, Linode, Softlayer – all are probably “bad” to Mandrill. There are spammy IP listing websites. By default, usually one of them almost always keep the IP added which is removed upon request via domain email. Sadly, this may trigger that Account Poor Reputation behavior. For a new IP, probably adding another test domain and then requesting is a bit better/clever idea. Reverse DNS does not matter.

Softlayer’s IPs are manually removed from the spam database. HP Cloud IPs are never used by normal websites. Searching with servers IP is the best way to find blacklisting by any spam listing website. Basically it is better to remove the IP from spam directory before adding the domain. Obviously, it is an impractically huge work.

It is near impossible to do anything with the IPs of the DNS. It is obvious that SPF Record and DKIM Record must be present at DNS record.

Mandrill Account Poor Reputation Warning is a False Positive. If it is creating any issue to your need, we would suggest to get rid of it and use another free Cloud Based Transactional Email Service. There is no meaning of fighting with a graphical web interface of Mandrill. Mandrill will definitely defend with hundreds of odd logics (which are common for most services with the cloud buzz word). Change it, Mandrill when will understand loss of users, they will fix it. Thats an advantage of Cloud services. Do not waste time with support unless it is a paid tier. Mandrill is not our reader of sponsor. Hence we worked as devil advocate for the readers. These poor rating may affect receipt of an email towards the intended target.

This Article Has Been Shared 978 Times!