Infrastructure as Code and Software Defined Data Center : Together We Stand, Divided We Stand

Previously we discussed on how the SDDCs and differ from the rigid traditional enterprise data centers. Plus their ability to enable a private cloud environment is not negotiable. The economic side of SDDCs from the perspective of a public cloud provider is bright. Public cloud SDDCs follows the same principles like the private cloud counterpart. The data center subsystems including compute, storage and network are tightly integrated with a centralized management systems.

For these reasons, we can see offers like $7/month 6 GB RAM server – which was impractical and funny to hear just 5 years back. Employing 3 persons with shift duty is enough to manage few thousand clients with unmanaged plan. Once deployed, virtual machines need not much care unlike few thousands of physical servers.

There are two methods of deployment of Infrastructure as Code – Push and Pull. The main difference is the manner in which the servers are told how to be configured. In the Pull method the server to be configured will pull its configuration from the controlling server. In the Push method the controlling server pushes the configuration to the destination system. Ansible Tower uses Push, is Declarative & Imperative. CFEngine uses Pull, is Declarative. Chef uses Pull and is Imperative. Puppet uses Pull and is Declarative. 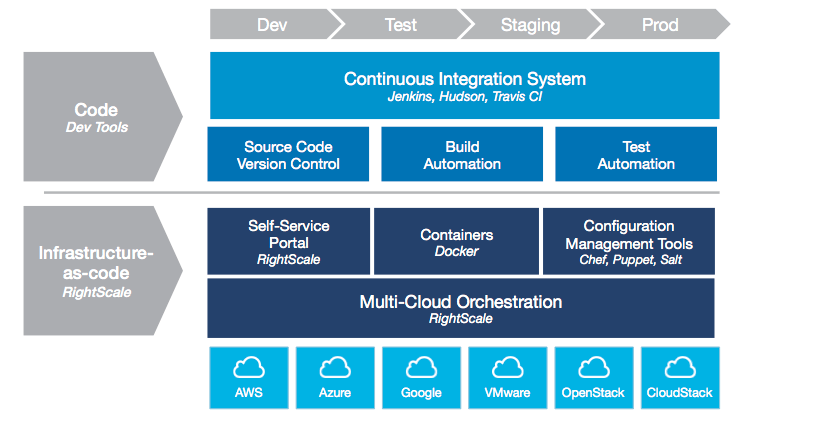 As like for the Industrial Automation, there is a crush for philosophical matters – the need of IT professional will decrease in future. Current consumption of more number of IT professionals are for various reasons, one of them is creating the templates for own need within a company. The following five points provide an overview of the capabilities of a software-defined data center (SDDC) that enable DevOps implementation :

Every developer or IT support person dreads a moment when they have to reconfigure the servers, because of the different aspects involved in the whole work, it is seemingly a tedious process. Tools like Vagrant, Ansible, Puppet, Docker makes the whole process easier. This is even made better by providing some RESTful APIs that can be integrated with control panel of the users.

We by default do not use Ansible now, but suggest to type the commands. In future, the GNU/Linux distro compilation could be automated with custom packages before installing it. Yes, Ansible is easy but it is not so easy like Red Hat’s OpenShift’s control panel.