One of our reader was complaining about WordPress Academic Journal plugins. As WordPress highest number of user compared to any web software, WordPress is great for initial works. However, WordPress was never developed thinking about so large usage. Although WordPress with PostgreSQL database can run, it is not exactly practical on production environment. Approaches Exist For Modern Academic Journal With Git Backend and Jekyll, OctoPress as Front-end Instead of PHP, MySQL in the Era of IoT.

Other Software Backends Other Than Modern Academic Journal With Git Backend

Drupal is probably used as more robust system for the Academic Journals, at least British Medical Journal uses. What they have used is written on Drupal’s official website :

It is obvious, for that modern look, except WordPress, Joomla, Drupal none can do the trick. This is the person who converted :

We will tend to say that, if WordPress is not suitable as Academic Journal Backend, Drupal is proven good and modern. But the basic matter is that, why waste so much Computing Power for the ultimate result as HTML? Rackspace Cloud Blog uses Akamai’s CDN to host their whole blog with OctoPress. Jekyll and OctoPress is more easy than a PHP and MySQL backend, is not it?

Jekyll and OctoPress are good solutions for Static Front-end. There is, indeed a living example :

ReScience use purely GitHub to host their content to full editorial workflow : 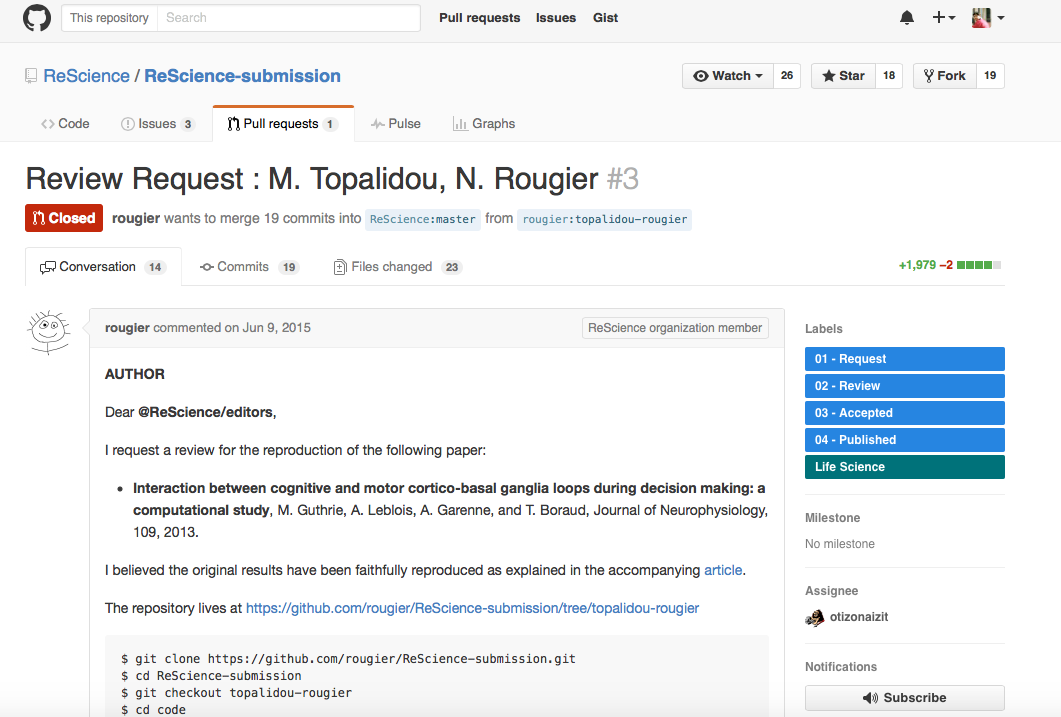 Indeed there is dedicated software named SciGit (which ReScience not used) which uses Git. What ReScience uses is really unique idea and fully follow the Free Software way. Here is their all related repos :

They use Jekyll as front-end :

The “CMS philosophy they use” is PUSH :

You can host your WWW subdomain on any CDN like KeyCDN. Instead of GitHub, use GitLab on other subdomain. 301 Redirect non-www root to www. There is no question of Database software. CDN is facing the traffic. Journals do not publish 4-6 hourly that need WordPress or Joomla. There are tools to write in markdown format, even in wysiwyg markdown editor exists :

GitHub or Gitlab has WYSIWYG editors too. Basically we need a nice workflow and practical front end. ReScience did that. Jekyll and OctoPress has quite large user base. We need some good working HTML output to start working on a scaffolding. Think carefully, using self hosted GitLab with OctoPress with CDN is most practical idea. It is money saving too. CDN’s all server’s will not fail on load. If you have no money, then use Free Cloud Storage like Dropbox to host Octopress or Jekyll or just GitHub. Only problem is DOI, which is not free of cost. ISSN is free. There are plugins exist to convert WordPress to Jekyll. With that one will need pandoc (a universal document converter). For pandoc, pandoc-crossref filter will be needed.

We suggest not to change the original idea of ReScience or PUSH except self hosting. What they does, they use GitHub’s server both for Submission-Editing process and Publication of Journal. We are suggesting to install Gitlab on your server for the Submission-Editing process and OctoPress or Jekyll for the content management system. Those who are not aware, basically OctoPress or Jekyll needs near nothing on server – that is why we are talking about CDN. Your own computer will process it. If you dislike WWW subdomain on CDN, obviously you can use your server.
The structure ReScience used is ideal :

So you need maximum four repo for your journal :

Downloading the whole project will work fine. Users of Open Journal System, how much “open” that is questionable. Most importantly, “Free Software” is desired over “Open Source”, hence Free Journal System is better word over Open Journal System. In other words – who will make PUSH or ReScience further better, should make their source code available on GitHub.

The softwares could be scripted like we did for OpenShift OctoPress. For the writers one script, for the editors one script and for the administrator one script. It will also force to use GNU/Linux or OS X over Microsoft Windows, which is actually do another good. For higher security, GPG can be used to sign. With KeyBase.io like Service, identification will be 100% assured.

This Article Has Been Shared 234 Times!